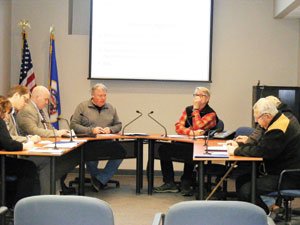 At the January 22 meeting of the Preston City Council, a resolution was unanimously adopted authorizing a donation of $335,000 in cash ($125,000) and land ($210,000) to the state of Minnesota for the construction of the Preston Veterans Home. Councilwoman Holly Zuck was not present, but participated via phone.

The survey of the Doherty property for the site boundaries will be done by the state. City Administrator Joe Hoffman noted the state wants to maintain a tree line around the home.

Councilman Robert Maust discussed the possibility of purchasing a small amount of additional property from surrounding property owners. He noted they are going to already acquire some of the Anderson property.

Mayor Kurt Reicks said he thinks there is the potential for development which could increase the city’s tax base on some of the adjoining property. Councilman Charles Sparks said he didn’t see any need for the extra cost.

An escrow fund has been established at F & M Community Bank for all the local donations for the veterans home. An escrow fund agreement proposed by the state was approved. When the state gets approval of federal funding sufficient to complete the project, funds including interest will be disbursed to the state. If the state is notified that the federal funding is not approved, funds in the escrow account, including interest, will be disbursed to the city.

Language for the return of donations with a proportional share of interest was approved should the project not go forward.

Hoffman said they should know this summer if the project is approved. In that case, funds may be transferred to the state in August. He noted it is possible the federal government could approve the project, but not provide matching funds until a later date when those funds become available.

• Hoffman explained the city has to prepare a pay equity report every three years. It appears the city is in compliance. Hoffman said in the early 2000s the council established a pay scale which is indifferent to gender. Submission of the pay equity report to the state was approved.

• There was more discussion about the Preston Oil Products (POP) property. Hoffman was directed at the last meeting to gather more information. He has since consulted with MPCA, the Petrofund and Chosen Valley Testing.

There was a question as to whether a private purchaser of the property would have to clean it up. Hoffman said state law requires any in ground tanks to be removed. This would be the responsibility of the purchaser.

It will cost about $7,000 to remove tanks and do preliminary testing. If contamination is found, a limited site evaluation will cost about $7,000, which would be 90% reimbursed by the state Petrofund. It isn’t clear if the city can hire a contractor to clean up the site if it doesn’t own the property. Hoffman made it clear that MPCA wants to make it work so the site is cleaned up. He hopes to have a proposal at the next meeting.

• The second city council meeting in April will be held on Wednesday, April 17 at 6 p.m. The Board of Appeal and Equalization will be part of this meeting. 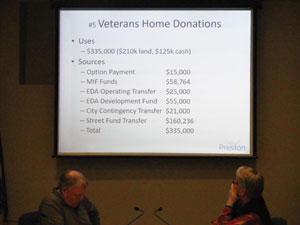