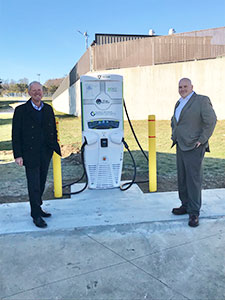 Need your electric car charged? You soon will be able to charge it in three locations in Preston. According to Joe Hoffman, city administrator, the city has joined an effort to build a statewide charging network. At this point, a level two charger is available for use at the Trail Head parking lot and a DC fast charger has been installed but is awaiting a few parts before it is operational at the visitors center. Plans are to install a second level two charger in downtown Preston next year.

SMMPA (Southern Minnesota Municipal Power Agency), worked in partnership with Preston Public Utilities on the project. SMMPA provided the chargers and the maintenance program, while Preston Public Utilities was in charge of the actual installation.  They were pleased to work with local people on the project. Since it was necessary to coordinate the local utility and local electricians’ schedules, it took several months to work through it.

Hoffman, who served as board president of SMMPA until October, shared that SMMPA plans to step away from coal use as of 2030 and wanted to encourage the adoption of electric vehicles. He considers this an effort to make people feel comfortable in traveling to and in the Preston area with electric cars, knowing that they can charge their vehicles there.

Chris Schoenherr, director,  Agency and Government Relations and Chief External Affairs Officer of SMMPA, said SMMPA’s board had decided they wanted to be at the front end of creating an infrastructure for electric car charging capabilities. According to Schoenherr, SMMPA has been working on the project for the last year. SMMPA is a wholesale energy provider to 18 diverse municipalities. The two largest municipalities, Rochester and Owatonna, were getting fast chargers through a VW settlement grant; the board decided to provide two level two chargers and one fast charger to each municipality they serve as well. In Fillmore County, that means Preston and Spring Valley.

Schoenherr noted there are three different types of people who choose to purchase an electric car. The cars are very responsive with very good torque so they are fun to drive; some people look at the environmental advantages, and some at the economical advantages. While 90% of charging is done at the owner’s home, people can become concerned about their charge when traveling farther than usual from home. The installation of the chargers in greater Minnesota is an effort to deal with this “range anxiety.”

Each city will decide the fees that they will be charging. Both Hoffman and Schoenherr emphasized that this is not intended to make money, but rather to encourage users to charge their vehicles and move on to make the chargers available for others. Hoffman added that the economics are probably not there right now for gas stations to install many; generally cities and utilities are installing them.

Chris Rolli of the Spring Valley Public Utilities said Spring Valley is getting the chargers provided by SMMPA installed, but they have not yet been wired for use just yet. The DC fast charger and one level two charger will be located at the grocery store parking lot. The other level two will be located in the parking lot of the old tourist information building. The grocery store parking lot was chosen in order to put the DC fast charger near primary voltage to feed it. (The fast charger needs a 480-three phase transformer.) Parking spots need to be dedicated for the charging stations as well.

Lanesboro has two level two chargers at the Poetry Parking Lot at Bass Pond, allowing for a total capability of charging four vehicles at a time. The chargers were purchased from ChargePoint and customers are able to pay through the ChargePoint app online. The city of Lanesboro, which has its own diesel and hydroelectric generators and purchases additional energy from MIEnergy, paid for the chargers itself.

The Chatfield Kwik Trip also has an electric car charger. It is a 20 amp, 120 volt, level one charger, similar to the chargers most homeowners have.

Kathy Zacher, Rushford City Clerk, reported that the electric commission was looking into the possibility of purchasing chargers through a grant, but with COVID hitting and other necessary projects, they haven’t followed through on it at this time. She shared that the board felt it would be a good addition for visitors to the city and would probably pursue it later again.

A conclusion to be drawn from this? Visitors to Fillmore County need not have “range anxiety”; Spring Valley, Preston, and Lanesboro have or will have charging for your electric vehicles available; other cities are considering it as well.