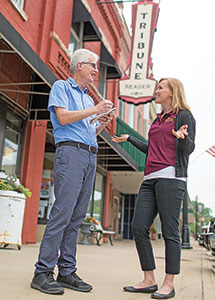 When most people retire from a job, they get to turn in their keys to the office, walk out the door, and start enjoying every day like it’s a Saturday.

When a person owns a business, it doesn’t work like that.  If they want to retire, they have to find a buyer, which can take many years.

David Phillips, who just turned 65 in February, has been looking forward to retirement.  His wife, Pam, has been retired since last year.

Ink in the blood

According to David, “My father, Fred Phillips, purchased the Spring Valley Tribune in 1974 while I was finishing my first year of college in upstate New York where our family lived at the time. I decided to move here with them, transferring to a college in Wisconsin. My last couple years there I worked for the campus newspaper and my first published story in a public newspaper was the Milwaukee Journal while I was still in college. I helped my father out in the summers until I graduated and moved to Boston to live with some friends from high school while trying to get a full-time job in newspapers.”

Phillips ended up working for newspapers in Florida and Texas, married Pam in 1979 and they had their first child in 1981.  Later in 1981, David and Pam moved to Spring Valley when his father had a reporter position available at the Spring Valley Tribune.  He eventually became the editor and took over the Tribune in 1988 when his father died.  “I expanded a few years after that, purchasing newspapers in the area over time to form the Bluff Country Newspaper Group,” he said.

“I’m the rare newspaper owner that came into the field from the journalism side, not the business or marketing side. I mostly enjoyed writing, photography and the opportunity to think creatively. Every week I encountered a blank slate to fill, causing some anxiety, but also creating an exciting challenge. I enjoyed the creative side more than the business side, but I knew I had to take care of business to keep going. As the economy tightened, dealing with business took more of my time, which made me think more about retirement,” explained David.

Phillips doesn’t have any grand plans for retirement as this came up somewhat suddenly.  “My wife retired in July so she is glad I’m joining her and I’m sure she has some ideas. I have several hobbies, such as running and hiking, that I will continue — and I even recently had two suggestions for a new race on the Root River Trail and another on dirt trails that I may consider now that I have time to organize. I also plan to keep busy with photography and perhaps try some new hobbies. I’m not leaving the community, so I will still be active locally.”

Friday, March 27, 2020, was David’s last day on the job.  He closed his offices in Chatfield, Spring Valley, Preston, Rushford, and Spring Grove.  It was a tough day for him, but he wanted to retire.

“I know some people are disappointed about losing the individual community newspapers, but they are living on in a new format so people will still get their local news, something that isn’t the case in every community these days. Advertising supports newspapers and many local businesses liked the reach of a free regional newspaper more. I had already determined six newspapers for this geographic area weren’t economically feasible and had talked to salespeople about combining the newspapers into the Bluff Country Reader earlier.  With the coronavirus mitigation shutting down businesses, which affected our immediate advertising revenue, I moved our schedule up and our last issue was a combined publication, which would have been the format going forward if the merger didn’t go through. We were duplicating coverage, postage, printing and other costs while splitting up revenue, so paring down to one paper will form a stronger publication for the area,” concluded Phillips.

All subscribers living outside of the area in which the Fillmore County Journal is distributed for free will begin receiving a subscription to this newspaper as a replacement for their subscription previously fulfilled by the six newspapers published by the Bluff Country Newspaper Group.