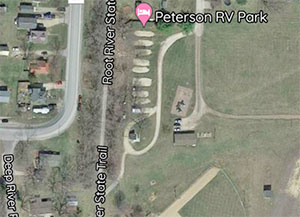 As the year begins to wrap up, the Peterson City Council is not only taking care of year-end details, but is also looking to the future of city needs and ways to improve the community. Several ideas were discussed, including city signage, cleanup, and park/campground plans.

Following installation of a new, attractive city sign on the Root River State Trail, which goes through the heart of the city, the council, spurred on by Councilor Gail Boyum, is now considering a new and improved sign and sign placement at the Highway 16 entrance. Friends of Peterson, a fundraising community group, has suggested the city work with a landscape designer, recommended by a local resident. According to Boyum, the goal would be to redesign the current sign, increase its size, reposition its placement, and install new landscaping, possibly with rocks.

Boyum has already spoken to MnDOT and received verbal permission for a sign not to exceed 250 square feet. There is a possibility of replicating the design of the new trail sign. “We would like approval to look into it,” said Boyum. “People like the color and our logo; just the looks of it. It was a good change for us and we would like to improve the one on 16, too… I’m willing to work with them (the resident and the designer).”

Additional benefits of a new sign would be greater readability if rotated to be perpendicular to its current setting and less maintenance for Public Works. Councilor Chris Stenzel, who was instrumental in the trail sign, indicated he was unsure if the same company could replicate a sign of much larger size, but will look into it further.

Stenzel brought forth another recommendation to the council, regarding the cleaning up of the overgrown and wooded area on the curve of County Road 25/Church Street upon entering the city from the west side. “I think that area needs to be cleaned up. Coming down the hill and when you start making the curve…”

“It’s the first thing you see when you come into town,” finished Councilor Tracy Seelbinder. Stenzel’s suggestions included trimming up trees to allow grass to grow, removing underbrush, and removing a large dirt pile. The area is owned by the Department of Natural Resources (DNR), who pays the city to mow what’s there.

“They probably wouldn’t mind if we cleaned up the weed trees that could fall on the trail. I even thought you could start planting new trees along there, like the maple trees along the street further down. We can plan for the future,” suggested Stenzel. Boyum will provide her contact details for the DNR to get the process moving.

The discussion continued as it moved east into the city park/campground area. “We really have to get the road moved in spring, get this thing cleaned up, and get the parking away from the shelter and playground area,” urged Mayor Tim Hallum. “We might have to get it right out of the gate. The earlier the better.”

Boyum again suggested the city work with the landscape designer to get ideas. She reminded the council that Friends of Peterson are considering a potential splash pad project for the park and a local scout recently proposed a gaga ball pit as a service project.

Hallum slowed up the idea of a splash pad and asked if Friends of Peterson would consider fundraising and leading a project to construct new restrooms with a shower instead. “That’s the biggest thing we need up there. If you’re really after something, wouldn’t it be more beneficial to do that instead? It’s a thing we need.”

Boyum noted the DNR has a program that the city might be able to take advantage of, to construct restrooms, because of the proximity to the trail. It would make the spot a trailhead. “It would make the area more user friendly; move the parking away and have more green space,” added Hallum.

“I’d like to see a professional look at it so we get something that’s lovely, too. Affordable, lovely, and paid for with grants,” Boyum responded.

As discussion over park set up and potential areas continued, Stenzel took the idea further suggesting the area that needs cleanup could be converted to diagonal parking for the trail off of the Church Street curve. “It’s going to draw people. Some don’t know to come in there,” he noted, referencing the line of trees that currently prevent people coming in from the west in seeing the park on the opposite side. “If there was a trailhead, the DNR might be willing to assist us in cleanup.”

“Our main focus for 2022 is up there.. our camp facilities and our park,” stressed Hallum. “We need to try and get it more usable. We need to form a committee. It does take some time. It’s an important area. Really, if we’re going to do this, we’re going to need a few of us to stand up and help.”

Seelbinder was the first to volunteer his help, noting the whole area should be looked at in a five-year plan. “It needs help in a lot of ways. We could do it in stages. We need to come up with a preliminary plan, so that it all comes together in the end.” Stenzel will also serve on the two-person committee. Boyum will assist with contacts and grant writing only when needed.

In other news, the council approved the trade-in of the current mower and purchase of a new John Deere compact utility tractor and grooming mower from Preston Equipment. The total cost is $21,400. While the city currently has the ability to pay for the equipment, it will be seeking a USDA grant that could pay for as much as 60% of the cost if approved. At the low end, it could be just 30-40%, but even that would help free up the funds for other needs.

With the potential savings of $6,420-$12,840 if the grant is approved, the council opted to next drop the annual levy from the preliminary 6%. “Maybe go to 4%?” asked Councilor Dave Colbenson. “We went with 2% last year because of how the world is acting. Now, with current mandates, vaccines, and stuff, we aren’t sure what’s going to happen for families.”

“I’m also inclined to go to 4%. Six might be a shock for people,” noted Seelbinder.

Stenzel expressed some caution noting what he’s seeing from a business standpoint. “Everything is 5-10% across the board. Four percent is fine, but we might end up short on things.”

“The highest we’ve ever raised was 5%, but we put that money into the streets. Now, what we’re doing is across the board,” noted Hallum. Further discussion included the grant savings, ability to move cash from the campground fund for needs, and a need to raise garbage prices, currently the only ongoing deficit for the city. “We don’t have to go and dig around the general fund as much and we tightened our budget up a bit. The only thing we’re short on is garbage and we’ll get that corrected in December.” The council unanimously approved a 4% levy for 2022.

Other items of business included certification of $9,268 in past due utility bills to Fillmore County for addition to property tax rolls, renewal of an on-sale and off-sale liquor license for the Driftless Trading Post and American Legion Post 526, and consideration of approving a 2-year contract for fire prevention from Rushford Fire Department. The fire contract was tabled until December.

The next regularly scheduled council meeting is Wednesday, December 8, at 6 p.m., at city hall. It is open to the public.