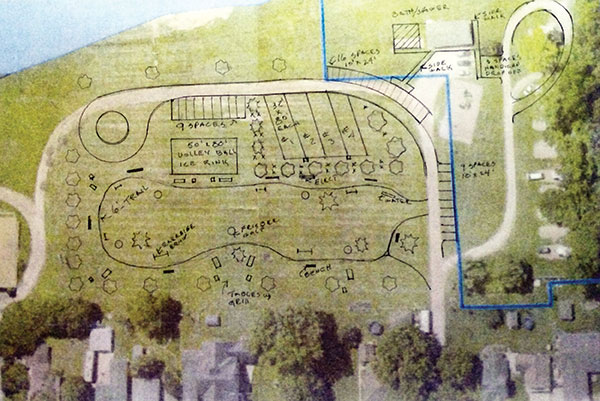 The April 13 Peterson Council meeting included discussion on many of the same topics discussed in March, but the city is getting closer to reaching some much-sought after goals.

A new welcome sign for the Highway 16 entrance into the city has been ordered. It was custom designed to match the recent sign on the Root River State Trail, but on a much bigger scale. The composite maroon and gold sign will add a fresh welcome to residents and visitors, along with proposed landscaping changes. Steel for sign supports is also being manufactured and the council is seeking out fill dirt, whether from the county or elsewhere, to build up the area prior to sign and landscape installation.

The city will be working with the Sentenced to Serve (STS) program for current sign removal and installation of the new items. It was recommended the sign be taken down soon, if it fits into the STS scheduling to make way for the fill. This will also allow for installation and a good cure time for concrete where the sign will be anchored.

Delivery of the sign is expected in early June. The plan is to have as much of the project completed prior to Gammel Dag city celebrations in mid June.

Plans for a complete rejuvenation of the city campground and park are also gaining headway thanks to the work of Councilors Tracy Seelbinder and Chris Stenzel. The original drawings of proposed plans have been vastly improved upon now that site measuring has taken place.

The preliminary plans now include up to nine parking spaces west of the main road with an additional 16 spaces on the road curve, just north of the pavilion building. A sidewalk would connect the second parking area to the building and an additional three handicap spaces and an unloading area would be immediately northwest of the building and also connected via sidewalk. New restrooms and showers would be attached to the east end of the building. The intention is to clean up cluttered parking and keep it at a safe distance from the playground.

Several camping spots would remain in the current location, backed up to the wooded area adjacent to the Root River State Trail, but four new spaces would be created just past the road curve in the area that used to encompass the Rushford-Peterson Middle School football field. These premium spots would be 32 feet in length and angled southeast to northwest. “The angle of the campers is to push noise to the valley and not to the neighboring homes and church,” explained Stenzel.

“We were able to minimize the kind of road work we’d have to do,” added Seelbinder. “We’ll have to get sewer and water back there to new spaces. Hopefully, we can start planting trees and start building up some screens.”

Seelbinder also noted he’d be working this week on locating grants for the project. There is some spending cushion in the Campground Fund. “Surely that should be able to be a part of this,” noted Councilor Gail Boyum.

The council expressed thanks for the work that’s been done thus far. “This is starting to look pretty good,” enthused Mayor Tim Hallum.

In other news, the city has mailed out letters/shutoff notices to 10 past due utility account holders. If not rectified, the electric meters will be pulled May 2. Typically, at least half or more come forward to discuss the issue with the city and set up payment plans. Those receiving notices are encouraged to do so.

During the time for public comment, new property owners Scott and Deanna Smith introduced themselves to the council. The Minneapolis couple has purchased the former R-P Middle School building and intends to transform it into their home, as well as the base for their remodeling business and some storage.

“We’re really enjoying it,” said Scott Smith. “We love the community. Everyone has been so welcoming and that’s been the best part: the people. It’s really different.”

“We can’t wait to bring it up to working order,” he continued. “We’ve got our remodeling business and would like to move that down here. The most surprising part is that we have fallen in love with the area.”

The next regularly scheduled council meeting is Wednesday, May 11, at 6 p.m., at city hall. The public is encouraged to attend.