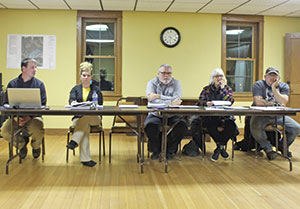 The City of Peterson enacted an ordinance regulating public vehicle nuisances in January 2019 after months of extensive discussion and formally approving the ordinance in November 2018. Despite notification to citizens, the city continues to hear from residents regarding the fines. Per ordinance, inoperable vehicles unless properly licensed or registered. In regards to nuisance storing and parking, no more than six vehicles may be stored outside a property and the locations of such are clearly defined. Citations are given per vehicle and subsequent citations are given if non-compliance is not addressed. The fine related to each citation escalates in amount as each citation is given.

In October, the council approved partial fine forgiveness, following citizen complaints. In order to qualify for fine forgiveness, property owners needed to bring parcels into compliance by November 6, 2019, sign a document agreeing to the conditions, and pay the remainder of the fine. Full compliance needed to be maintained for one year as well. The full amount of the fines would be reinstated should property owners fail to achieve and maintain compliance. If fines remained unpaid, the amount was certified to the county in December for addition to tax rolls.

During time for public comment at the January 8 meeting, Gerald Horton, who stated he was in attendance on behalf of Everett Evenson at 226 South Church Street. According to Horton, Evenson is being charged for vehicles that were on the property when he purchased it. He further stated that titles for the vehicle are in a safe owned by Evenson’s father, to which he does not have access.

Mayor Tim Hallum noted fines applied in 2019 cannot be altered, having already been applied to property taxes. “He bought the property and they sit on the property,” said Hallum, who suggested Evenson contact the city about the issue via phone.

Another citizen complaint brought forth by City Clerk Chris Grindland was a cautionary notice. A person, in dark clothing, was seen in the early morning hours of January 7, walking behind properties in an alley. Grindland reminded the public to keep their properties and belongings locked and to take extra precautions.

The meeting also included annual housekeeping items including designations and rates. The majority of items remain the same as in 2019 with the exception of acting mayor. Councilor Dave Colbenson was appointed acting mayor for 2020. Councilor Gail Boyum will remain acting clerk/treasurer and Colbenson and Councilor Lisa Price will continue serving as Financial Committee. Council meetings will continue to be held the second Wednesday of each month, at 6 p.m., at City Hall.

Looking forward, Public Works Director Rick Lee brought forth the equipment estimates that are starting to trickle in for 2020. Last month, Lee met with Hallum and Grindland to discuss needs for the year and available options. Trading in the city tractor for more efficient equipment remains one alternative if traded for a tractor with a mower deck, broom, and snowblower. A Bobcat Toolcat, capable of heavier hauling and additional implements was considered, but proved too expensive for the city. A two-pin, drive ove and lock-in belly mower with automatic PTO is also an option. “We keep with what we have or sell what we have and buy a little bigger that does beyond mowing,” suggested Halum. “We’re reviewing options and looking at state bid pricing options.”

While estimates are just trickling in, they’re providing the city some scope as to what is affordable expectations. Leasing was not recommended, as low interest rates make it less practical. Equipment also has to be able to maintain levee slopes. “We will bring back more numbers in the coming months to see what’s best for the city,” added Hallum.

The next regularly scheduled meeting is February 12. The public is encouraged to attend.