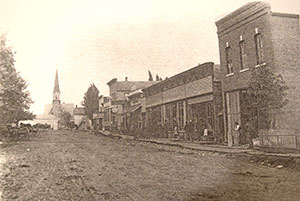 The following history of Spring Grove was written in 1880 by Sven H. Ellestad in the Spring Grove Posten, the town’s first newspaper, published weekly in Norwegian for approximately a year. An annual subscription cost 50 cents. There has been no change in the punctuation from a 1947 reprint in English as translated by his niece, Clara Johnosrud Torvik:

“Thirty years ago the vicinity of the present Spring Grove was a wilderness. The only enlivening sounds were the calls of the wild animals, the songs of the birds, and the weird cry of wandering hordes of Indians. The fertile land lay barren; no sound of an axe was heard in the woodland, and no smoke from a friendly, family hearth rose toward the heavens.

“The trend of the caravans of immigrants was toward the west, and they came quickly. As early as the summer of 1852, Peder Johnson Lommen, of Valdris Norway, came with his team and settled where he now dwells, about two miles northwest of Spring Grove. Soon others came to make their homes here. Among them were Even Hoime, Knut Bergo, Haaken Narveson, Knudt Kleland, Ole and Thorleif Berg, Torgeir Johnson, Ole Ulen, and John Kroshus.

“That fall Ole Ristey came who passed away a few years ago, at a ripe, old age. The following year more settlers came and before long all the tillable land of a large area was taken possession of by sturdy pioneers, most of the Norwegians.

“The first school house was built in 1857, and in the same year the Rev. C. F. Clausen arrived, who was a theological graduate from the University of Oslo, Norway, and a friendly, personable older man.

“An American, Smith by name, who at present has his home in Caledonia, was the first merchant in Spring Grove. Mons Fladager, a brother of the sculptor Ole Fladager, who died in Rome, Italy a few years ago was the second merchant here. (People well remember the Fladager Store on the north side of Main street, with a big iron Lion as its sign, which now is found by the M. Fladager store on the opposite side of the street.)

“Soon after Mr. Fladager, came the merchants Nils Hendrickson, and Nils Olsen. Enoch Anderson of Trondhjem, Norway was the first blacksmith, and soon Spring Grove had business establishments representing almost all lines of business and trade.

“The first church erected was completed in 1868, and was torn down in 1879, as a much longer, magnificent church edifice had been erected and was in use at that time. Pastor Claussen passed away in 1870 after a painful illness, and was succeeded by the Rev. Styrk S. Reque, a man full of zeal and the vigor of strong manhood. As his predecessor had done, so he also served, not only Spring Grove Trinity Lutheran church, but Wilmington, Black Hammer and Riceford congregations.

“The first train rolled into Spring Grove, Oct. 8, 1879, and we can now if we may express ourselves in this fashion, travel to all parts of the world on the wings of steam power! While Spring Grove has grown to be a beautiful and busy village, the surrounding territory has also made great progress. Everywhere the eye beholds well cultivated fields, green valleys, cool, shady woodlands and well built up rural homes. Prosperity is in evidence in spite of meager crops the last years.

“The author Krstofer Janson, visited here during his trip through the states, and lectured here March first and second, this spring. We hope this talented man’s discourse on life and its problems will be an inspiration and have a lasting effect for the future.

“If it is admitted that Spring Grove and vicinity have contributed somewhat toward the civilization of the northwest, it may not be too assuming on our part if we wish to take part in greater measure by sending forth this little, unpretentious Spring Grove-Post into the world.

“We have in our subscription invitation our standpoint, that we love the common people and those in authority, and love and respect the noble and freedom-loving men and women, without reference to station in life, or wealth or the lack of it.”