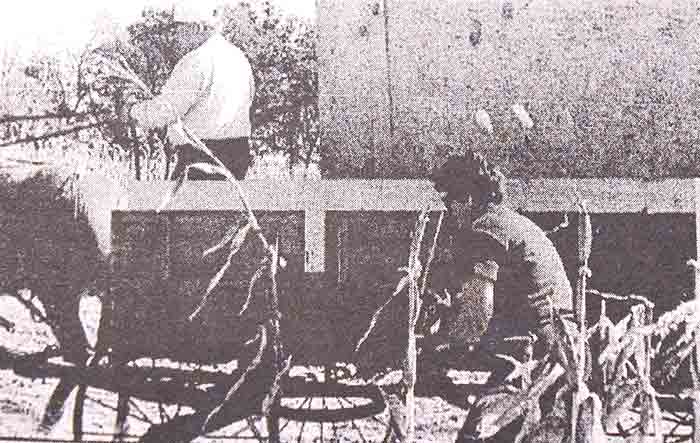 A bang board stood upright in a horse-drawn wagon. It was a target for a contestant to hit with an ear of husked corn, so the ear would fall into the wagon without the corn picker having to look at the wagon. He or she could continue looking only at the corn being husked or shucked.

In 1940, witnessed by approximately 1,000 spectators, George Reining of Caledonia successfully defended his cornhusking championship by shucking 23.4 bushels in 80 minutes at the annual contest, sponsored by the Houston County Rural Youth – that year at the Clifford E. Orr farm in Mound Prairie Township east of Houston on highway 16. Reining qualified to represent Houston County in the district contest.

Before mechanical corn pickers became popular in the 1920s and 1930s, corn harvesting was accomplished by hand. Husking removes the ears of corn from the husk or shuck that envelops them. Corn husking is also referred to as corn shucking or corn picking – depending on the agricultural area.

Since colonial times, corn harvesting had been a social event, a “husking bee” where neighbors assembled to socialize while husking. That tradition had waned by 1922 when Henry Wallace, the Secretary of Agriculture, first promoted husking contests. According to the Huskers Digest (circa 1920), “Unrecorded husking contests had taken place on many farms when the boss would challenge his hired men to see who could get to the end of the field before the other.” That made physically challenging labor a source of pride as well as income, especially when local competitions became official and drew large crowds of spectators. And there were 18 national contests from 1924 until the tradition was halted by World War II in 1941.

A highly efficient husker could throw 40 or 50 ears per minute – with one ear hitting the bang board, one in the air and another being picked off the stalk – at the same time. Shucking over 100 bushels a day was considered normal for good pickers. They could earn 10 cents a bushel, or $10 a day. That was good pay during the Great Depression of the 1930s, with the same purchasing power of $214 in 2022.

The only special equipment was a husking peg or hook, which was strapped to the hand or finger to tear the husks open. Many shuckers wore gloves; others husked barehanded. Most grasped the ear with the left hand, and with the right hand, yanked off the husk, twisted the ear from the stalk and threw the ear off the bang board into the wagon.

Supervised by judges, individuals competed to determine who could husk the most corn from standing rows and throw the ears into a horse-drawn wagon. There were time limits, often 80 minutes of picking, and rules involving deductions. Husking the heaviest load did not automatically mean victory – only the heaviest loads following deductions.

The two types of deductions were “gleaning” and “husks.” Gleanings were the marketable ears of corn (over three inches long) that a contestant left out in the field. That included ears left hanging on the stalks or the ears that missed the wagon. Gleaners were assigned to gather those missed ears, the total pounds of which were multiplied by three and then subtracted from the weight of the corn in the wagon. However, in the early years, only two pounds were deducted for each pound of gleanings.

It was better to have “clean” corn, ears with a minimum amount of husks. Shucks tended to attract rodents who might make their winter residence inside a storge unit, called a corn crib. During a long winter, mice and rats also ate a considerable amount of corn. Contestants were permitted up to five ounces of husks per 100 pounds of corn without a deduction. For each ounce between five and 10 ounces, 1% of the load was deducted as a penalty for “dirty” husking. More than 10 ounces meant a deduction of 3%.