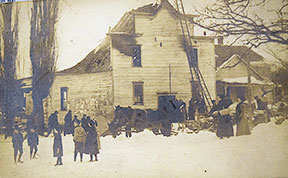 A man “carrying a casket upside down on his shoulders in the red glow of the flames, was a weird sight,” according to one account of a fire that caused the evacuation of caskets from the Schummers Building in Caledonia.

Fire was a great threat to the survival of fledgling southeast Minnesota villages during the last half of the 1800s. With closely-clustered frame buildings and the labor-intensive transport of water, almost everyone was a firefighter. In 1870s Caledonia, water came only from wells and cisterns. In case of fire, men, women and boys rushed to form a bucket brigade from the Zenner cistern near the Koel Hotel. The “Craigen” well had a two-bucket system in which an empty bucket would be going down as a full bucket was coming up.

The first fire alarm was a large steel triangle, which was replaced first by a bell and later by a louder steam whistle. Church bells also served as fire alarms. After a village hall was built, it housed the firefighting equipment and a fire bell that rang from a rooftop cupola.

The village block between Grove, Marshall, Main and Pine Streets experienced many blazes. Especially noteworthy was the devastating destruction on the night of October 4, 1877. About 2 a.m., the fire broke out at the E. P. Dorival store on the corner of Main and Marshall Streets. One newspaper reported, “Before any organized effort could be brought to bear… it was evident to everybody that not only this building, but the entire block must go.” Therefore, rescue efforts concentrated only on what goods and contents could be saved from soon-to-be burned buildings.

After the destruction of almost the entire block, the citizens of Caledonia realized the need for better fire protection. The solution involved two movable, six-foot-long by four-foot-deep water tanks, which were secured to platforms upon which men hand-pumped water through a two-inch hose. The tanks on wheels were lugged to the fire by men, who although physically strong, were soon breathless. But bucket brigades might still be necessary.

Another memorable blaze destroyed William West’s Blacksmith Shop in 1879. Citizens were aroused from slumber about 3:30 a.m. to find a fire consuming the blacksmith shop and then the adjacent barn. The several horses in the barn were rescued, but the two structures, which also housed Charles Brickman’s wagon shop, were reduced to ashes. West’s estimated $3,000 uninsured loss would have had the equivalent purchasing power of $82,000 in 2021. The extraordinary efforts of Capt. W. H. Harries, O. J. Welda and many others were credited with saving three buildings, including the drug store and newspaper office.

On that same night just north of town, on the McNabo Farm, owned by A. B. Sprague, a corn crib and straw stack were burned. There were suspicions that both fires were intentionally set.

Ten years later on Sunday morning, September 29, 1889, church bells rang early to awaken the populace to battle Caledonia’s worst conflagration. Attention was first drawn to the A. D. Sprague, brick-faced block at the corner of Main and Kingston Streets, which included Dahle’s Hardware, Sprague Brothers General Store, the newspaper printing office and the Bank of Caledonia, where the safe fell into the basement. Styer’s Hotel avoided destruction, but across the street, the heat from burning buildings ignited both the jewelry store and confectionary. Bert Drowley survived being blown into the middle of the street by the explosion of a powder keg. Two stone buildings, one with iron shutters, survived the heat – one of which also protected two other buildings.

Six days later, the Caledonia Fire Department was founded. Members missing two consecutive meetings were fined 25 cents and subject to expulsion. After that 1889 disaster, voters in 1894 approved a water plant with a 400-foot deep well, water mains, fire hydrants and a 100-foot standpipe reservoir for 65,000 gallons of water.

On January 8, 1910, fire destroyed the Hundt Opera House after deep snow delayed the hose being connected to the hydrant. After students lit stoves in preparation for the evening’s high school play, a defective or overheated stovepipe ignited the ceiling.

All fires were serious, but repeated arson – elicited terror! (Next week.)