Skeletons, corn whiskey, Indian mounds and rumors of gold are colorful images of the past for a hamlet with a curious name. More recently known for a popular supper club, the village of Yucatan is on Highway 4 between Houston and Spring Grove in the picturesque Yucatan Valley below wooded bluffs and hills in Yucatan Township of western Houston County.

Today in 2020, there appear to be four residences in the town site that once featured a store, a dance hall, a blacksmith shop, a school, a post office and a nearby creamery.

Settlement began a few miles south in 1852 when several Winnebago Indians were said to help Edwin Stevens build his log cabin. This first settler moved to a dwelling in the woods near the South Fork of the Root River in the autumn of 1855. The next spring (1856), he moved again and platted a 50-acre townsite and constructed five log buildings. For an unknown reason, Stevens named the settlement Yucatan – said to be 2,000 miles north of the large Mexican peninsula with the same name.

Stevens completed a flour mill and started a sawmill before again becoming a man on the move. A few months after platting the town, he sold his holdings and left the area never to return in the fall of 1856 – first to Worth County, Iowa, and then on to the state of Washington.

In that same year, Edmund P. McIntire, a native of Dedham, Mass., who would later become the district’s first state legislator, built the Dedham Mill on Riceford Creek. He added a still in 1859 to make whiskey out of the corn that some used as payment at the grist mill.  The still, said to produce 100 gallons a day, was swept away in an 1886 summer flood.

The original 1866 two-story brick store and dance hall was destroyed by a tornado, thought to be sometime between 1903 and 1908. It was replaced by a one-story wooden frame store with a tavern and dance floor in the rear. The Yucatan Supper Club later occupied the structure. 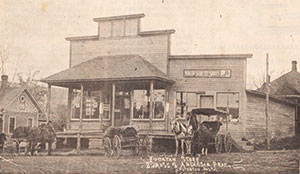 That popular gathering place served food until 1997 when it succumbed to a lack of winter snow and summer road construction. Supper club owner Suzanne Crossman told the La Crosse Tribune that snowmobiling had been a significant source of business until a few years of meager snowfall. A fire engulfed the building on November 18, 2018.

There were several early rural schools in the township, including an 1857 log schoolhouse in the town site, which was replaced with a frame building during the 1860s. The “stone school,” currently the Yucatan Township Hall, still stands up the highway toward Houston. Farmers quarried stone on the nearby bluffs for the 18-inch thick, hand-cut stone walls.  Today, students attend school in Houston.

About 1918, rumors abounded that there was gold in the valley. But analysis of a couple of nuggets did not lead to mining.

Because several skeletons and arrowheads were found inside, the “Catacombs of Yucatan” was the name of a Depression-era project to commercialize and provide public access to a hillside cave in Yucatan Valley. The 272 feet of passages were actually in Black Hammer Township. A period printed announcement described stalactites and stalagmites, formed by 100 years of water action.

Work began with a retaining wall in 1932 before the cave was opened for tours in 1934. A dance hall and restaurant were added in 1935. But by 1938, the entire commercial venture became a victim of the Great Depression economy.

In 1995, the limestone cave was brought briefly back into the limelight. Musician Dan Senn returned to this site of his 1950s boyhood summers for a two-day sound art and video presentation. 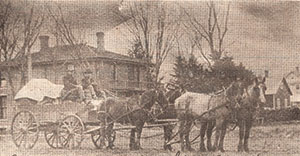 History before European settlement was recognized when low mounds became part of the National Register of Historic Places in 1996. Fort Yucatan was the home of Oneota Indians (ancestors of the Ho-Chunk) after they left the La Crosse area in the early 1600s. The earthen barriers may have afforded protection from neighboring tribes.

Before roadwork on Highway 4 began in the mid-1990s, an archaeological survey found numerous Oneota artifacts.

Today’s unpretentious, pastoral township certainly has a surprisingly, peculiar past.