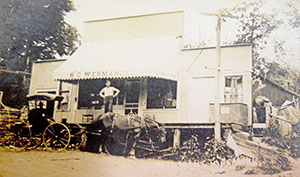 The Jacob Eide family lived above their store/post office, which was burned to the ground when lightning struck during a nighttime thunderstorm. After exiting, the parents took a head count and believed all the children were out of danger. But their count was incorrect; they forgot that a neighbor child had been sleeping over. Mrs. Eide went back inside to salvage a quilt that her mother had made for a wedding gift. When she jerked the quilt off the bed, she was shocked to see her young son, Elling, rolling out. After that nearly-fatal 1901 fire in the heart of the Houston County village of Wilmington Grove, Mr. Eide constructed a new house and a one-story store.

When the agricultural community had been founded about 1860, nothing was more valuable than a dependable source of water. The village was nestled into steep and cozy, curving terrain where a spring gushed out below the ridge. It was two miles north of a cemetery and 1857 log schoolhouse which hosted worship services until the 1868 church was constructed on the same site. Along with a new cemetery, the current brick church was constructed in 1908 within walking distance from the townsite.

The Norwegian immigrants called their new village Nittedal after an area near Oslo, Norway. However, when the post office in Portland Prairie was relocated in Nittedal, a new name was required, since there was already an established Minnesota post office with that name. The name Buffalo was suggested, but that was also a postal duplication. The community in Wilmington Township (named for Wilmington, Del.) and the post office became Wilmington Grove, referred to by most as “the Grove.” Scandinavian immigrants pronounced it with two syllables, Gro-vah. Later, Wilmington was the name commonly used. The post office operated only a few years.

The first enterprise in 1888 was the Crystal Springs Creamery, which became a farmers’ cooperative in 1904. There was also a poultry dressing plant, feed mill, blacksmith shop, shoe repair, sawmill and later an automobile garage. Although the creamery business closed in 1950, the newer 1924 building still stands in 2021. Except for the creamery, almost all other buildings clung to the steep hillsides. The cement or concrete slab that supported the store can still be found. The 1880 blacksmith’s house survives as does the newer church lay leader’s house atop the ridge and across the road from the basement of the butter maker’s house. Nothing remains that a casual observer would recognize as a townsite.

Ole Haugen opened a store in 1889, and the building lasted 12 years until that 1901 fire. Then the newer edifice had three different store owners until closing in 1935. The store was reopened in 1940 but dismantled when the proprietor Maurice Vick soon left for World War II military service.

Years ago, Emma Senness and Ole Sanness shared memories of the store, which was open every day, even on Sunday, and was a vital part of the community. Groceries included staples such as coffee, sugar and crackers as well as cookies and an extensive assortment of candies – licorice, jelly beans and hard candies, such as peppermints. The items were weighed on a big scale. Usually, there was no fresh meat, but there might be summer sausage and occasionally bologna as well as herring in small wooden kegs. Flour was sold in cloth bags weighing up to 50 pounds. During the canning season, sugar was offered in bags weighing 100 pounds.

Also for sale – thread along with fabrics, such as gingham and muslin plus other dry goods, such as boots, overshoes, overalls, stockings, gloves, dishes, jackets, nails, bolts, spades, hammers, shovels and milk pails. In the era before rural electricity, kerosene lamps and lanterns could also be purchased. People would have their own five-gallon kerosene cans refilled.

The store was heated by a large wood stove. There were two long counters running the length of the store, and the walls supported shelves. There was also a storeroom. Patrons and their horses arrived with buggies and wagons. Horses were tied to hitching posts as people shopped. All farmers had a flock of poultry, and eggs were brought in to trade for groceries.

Much of this information was provided by Wilmington-area historian Jan Lee Buxengard.

In the late 1980s, Lee Epps lived in the 1880 blacksmith’s house in the old townsite of Wilmington Grove. 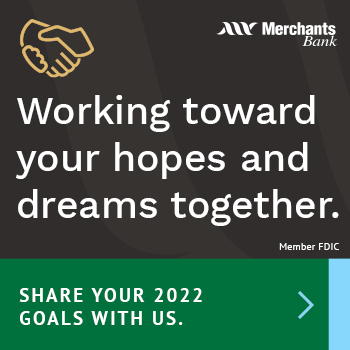