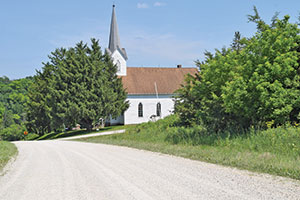 Following an Indian trail, fur trader Henry Mower Rice forded a creek while surveying what would become a settlement that (along with the creek) would be named for him – the town of Riceford, located in Spring Grove Township along Riceford Creek in southwest Houston County on the Fillmore County line.

Rice, later one of Minnesota’s first two senators, would be one of only two Minnesotans honored with a statue in the United States Capitol. Riceford would become the most progressive inland town in the two-county area for two decades – until a lack of wheat and the laying of rail.

What was once a bustling business boomtown is a century and half later just a few rural residences. The only surviving community edifice is Our Savior’s Lutheran Church, built in 1877. The final regular service was June 18, 2000, followed by a couple of annual summer services.

The first settler, William D. Van Doren, purchased the land on which the village sits, in 1854. But it did not become a town until the arrival of enterprising Mexican War veterans Job and Charles Brown. The town of Brownsville had been named for them, and Job Brown chose the names for both Riceford and Houston County.

Their friend Rice surveyed before the brothers and/or Rice platted the town in 1856 – four streets wide and four streets deep. Settlers had already begun moving into the area with Spring Grove town and township founded in 1852.

Job (Biblical pronunciation with long “o.”) Brown opened a store, and other settlers erected homes and commercial buildings. A dam and sawmill began providing lumber just above where Job Brown built a dam and flouring mill, both in 1856.

Job Brown operated two stagecoach lines, transporting the mail and passengers. By the end of 1856, he had sold lots to a dozen prospective businessmen. Lewis Barker built the Barker House Hotel. The United States Census of 1860 included many professional men and skilled laborers. 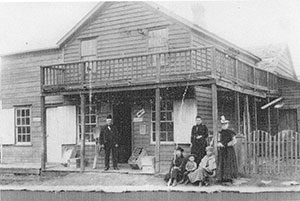 There were early religious efforts by Methodists, Adventists and a Quaker, but only Our Savior’s Lutheran survived to construct a building. The Norwegian families thought it too far to walk to Spring Grove, Garness or Black Hammer for worship. They had doctrinal differences with Scheie Lutheran of the Hauge persuasion, which was opposed by the State Church of Norway.

At first a satellite of the Norwegian Lutheran Church in Spring Grove, a separate congregation at Riceford first met in 1875. The building was constructed at a cost of $3,000, and meetings were held every third Sunday, sharing Rev. E. P. Jensen with Newburg and Black Hammer. The church cemetery is separate from an older, adjacent graveyard – the Olde English Cemetery – which served Methodists, Quakers and other Protestants and is the resting place for a few Civil War veterans.

Social life included frequent rowdy Saturday nights and Fourth of July celebrations. One dance ended in a brawl between feuding Norwegians and Irishmen from nearby Irish Ridge in Fillmore County.

Decline came first slowly with several wheat crop failures and then quickly when bypassed by the railroad. The milling of wheat, one of the main industries, was the victim of weather, insects and mostly depletion of fertility. 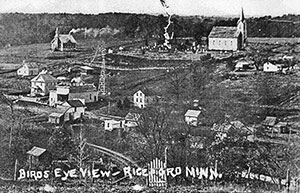 Job Brown and his two stagecoach lines brought the boom days into the small, scenic creek valley, but prosperity departed in 1879 as suddenly as it had appeared when the first railroad chose the more level terrain through Spring Grove and Mabel.  Some Riceford shops and homes were dismantled, loaded onto hayracks and moved to Mabel.

Three years later, a historian listed only one mill, one store, one foundry, one blacksmith shop and “a stopping place for itinerants.” The post office closed in 1902. Harry Loing operated his store until 1957 – “too far off the beaten path” for wholesale salesmen.