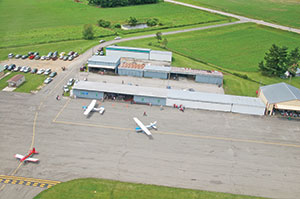 The first chartered flying club in Minnesota, the Royal Flyers, used a grass runway on a farm just outside of Spring Grove. Twenty-three years later, an airport was completed at Caledonia, the first and still only airport in Houston County. The Houston County Airport was approved in 1966 with construction in 1968 and dedication on September 21, 1969. The only other airports in southeast Minnesota were at Winona and Rochester.

Glenn Kinneberg was one of 10 charter members of that Royal Flying Club, organized in 1946 and chartered in 1947. He was an active pilot for 72 years; his book Flaps Up is available at several area libraries. Kinneberg is the only Houston County resident in the Minnesota Aviation Hall of Fame. But non-resident instructor at Caledonia, Ed Chapman is also in the Hall Fame.

The Red Baron Flyers, the first club organized at the airport in 1968, is the second oldest, continuously-operating flying club in Minnesota (second by a few days.) They purchased a Piper Tri-Pacer in Virginia for $3,500 and later bought a navigational aid radio and built an arrival/departure building.

In addition to the Royal Flyers and Red Barons, other clubs were the Clover Leaf Flyers, the B. M. A. Flyers, Hiawatha Flyers and Four Star Flyers. But for approximately three decades, the 52-year-old Red Barons have been the only club at the airport. Club president Arne Beneke estimated the average existence of a flying club is only four to six years. The Red Barons, now with 26 members and four instructors, own two airplanes and four hangars. Other area pilots have their own planes; all 14 hangars are occupied.

Membership in a club offers the most affordable way to learn how to fly. The first area instructor was former Air Force instructor Herbert Sundet, who just after World War II, taught flying lessons in Spring Grove for $2 an hour plus $2 for use of a plane and gasoline. Despite decades of inflation, Beneke said Red Baron current flying lesson expenses are by far the most reasonable in the area.

Vernon Fruechte was the first flight instructor at the airport until 1972. For over a year, instructors were hired from Winona and La Crosse. Then in 1974, Duane Deters received his flight instructor certification and educated local flyers for 28 years. One of his students, Dale Scobie, became a certified instructor in 1992 and trained other pilots for 26 of his 30 years in the air.

During a teaching career at Caledonia, Red Baron John Pongratz taught an elective aviation class as part of the high school curriculum for about five years. A few of those students would go on to become pilots.

Planes at Caledonia were originally going to land on a grass runway, but later an asphalt surface was approved. The landing strip was paved, but planes had to land over power lines. The pilots paid to have them buried.

Landing over some trees had posed a similar problem in the early years at Spring Grove, recalls Kinneberg, about the 600-foot landing strip in the 1940s. The county airport has an approximate 3,500 feet of runway.

Dating back to the dedication year of 1969, the annual social and community event of Houston County pilots, with the help of the Caledonia Lions Club, has been a popular fly-in breakfast on the last Sunday in June. There have been as many as 70-90 airplanes flying in with 800-900 people enjoying breakfast and plane rides. Due to lack of workers, there was a two-year hiatus before the event resumed in 2019. The pandemic of 2020 has delayed what would have been the 50th fly-in celebration.

Thus far, the end of World War II has ushered in 74 years of local aviation, the last half century at the Houston County Airport.