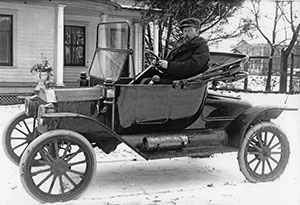 In 1897, Houston-based physician Dr. Lewis K. Onsgard and two companions perilously oared through a swift, unpredictable current to reach a patient who was accessible only by boat after floodwaters washed out a bridge. In Houston County and southeast Minnesota, both providing and receiving medical care in the 1800s were as challenging as most other aspects of pioneer life.

From the first half of the 1800s, few accounts of medical care survive. It appears that clerks of early lumber and fur companies had some rudimentary medical knowledge. Early missionaries realized that health care helped the recruitment to the faith.

In later decades, some like Dr. Onsgard were professionally educated. But in earlier decades, qualified care was rare west of the Mississippi River. Dr. Giles James Sheldon, arriving in 1853 at Brownsville, is thought to have been the first physician to arrive in what became Houston County.

However, anyone, regardless of training, could declare to be a doctor. Some practitioners were opportunistic quacks or merely bone-setters or herb purveyors. Unfortunately, not all who were well-meaning had the benefit of professional training but could take pulse and temperature and dress wounds. If having been associated with a trained physician, some had practical knowledge of drugs and their effects. For the self-educated, it was possible to carry two or three medical books, most notably Gunn’s Domestic Medicine or Poor Man’s Friend, published in 1834. Most doctors worked out of home offices.

There were many practitioners in southern Minnesota in the 19th century. At first, they came west from more established areas. Some were itinerant; some stayed for months or a year before moving on. But many doctors made permanent homes. Later, like Dr. Onsgard, natives of Houston County became educated physicians. Many became prominent citizens in many aspects of community development. Written accounts of their civic and cultural contributions are more numerous than descriptions of their medical practice.

Obstetrics, maybe the most common field of healthcare, was most often handled not by physicians – but by midwives. Doctor fees were reasonable, but midwives were less expensive and offered more comprehensive services. After attending the birth, midwives also helped with housework while remaining a week to care for mother and baby.

Hardy pioneer women were expected to bear children without the extravagant assistance from a physician. Doctors were summoned if there were serious complications. With this delay, the lives of mothers and babies were lost. However, 19th century physicians, much less midwives, knew little about preventing infections.

Pioneer settlers were generally sturdy and got along reasonably well in times of illness with care from family and friends. Disease was most serious for young children, not yet hardened to the rigors of frontier life. Doctors did what they could for diphtheria, smallpox and typhoid fever. They were also needed for emergencies and accidents. Accidents did occur, especially in pursuits of farming, milling, lumbering and hunting.

Townships near the Mississippi River had the greatest fear of communicable diseases, especially the deadly Asiatic cholera, thought to be transmitted by travelers on riverboats. Cholera caused more worldwide deaths, more quickly than any other epidemic disease in the 19th century. There was a cholera epidemic from 1826-1837 and another in the 1850s.

Providing medical care meant making house calls day and night in all types of weather while traveling on foot, horseback or buckboard over primitive or non-existent roads. It was endless and arduous work for men of dedication and energy.

Dr. Paul Bjornson, a native of Iceland, was the only physician in the town of Houston in 1879. It was late in life that he was able to purchase a team of horses and buggy for professional travel. Until then, he walked to neighboring homes or hired a livery rig for outlying calls if a patient did not send a team and lumber wagon for him.

Dr. Rolland Fuller Sheldon, tirelessly traveled from his home in Sheldon to relieve the suffering in the Norwegian settlements of Black Hammer Township during an epidemic of black measles in 1863. He came down with measles and died at age 37.

Source of this article came from writings of Nora H. Guthrey at the Mayo Clinic, reprinted by the periodical Minnesota Medicine in 1945-46.

Photo: Dr. Lewis K. Onsgard, like other physicians in the 1800s, relied on horses for medical house calls. But when until automobiles appeared, his Ford was the first motor car in the town of Houston.
Photo courtesy of the Minnesota State Historical Society