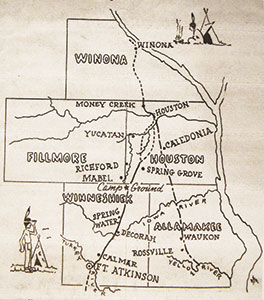 First of a two-part series

Hundreds of years before paved roadways, there was an extraordinary prehistoric trail near present-day Spring Grove and Houston. Before statehood, Spring Grove Township named one early road Indian Trail Road, which is now part of Houston County Highway 8 where it meets Highway 44.

“While most Indian trails were only narrow footpaths through the wilderness, this one was as wide as a cart-road and worn deep by much travel and the dragging of tepee poles,” wrote area historian Percival Narveson.

It is thought to have been created by the ancient Mound Builders, the immediate ancestors of the Sioux Indians. There is ample evidence of Mound Builder life along the valleys of the Mississippi River system, including the Yucatan Valley between Houston and Spring Grove.

Although it likely extended past Winona, it was known as the Winona-Fort Atkinson Trail, which wended through Money Creek Valley and crossed the Root River below Houston before continuing through South Fork Valley. It is not known whether the trail went through Yucatan Valley or Beaver Creek Valley toward Black Hammer. After crossing the Black Hammer-Spring Grove Township line, the trail continued along the east-quarter section-line of Section 4 before crossing Highway 44. It ran near the bluff east of the former village of Newhouse before crossing the state line in Section 33.

The prehistoric course crossed Highland Township toward Locust and then the ghost town of Spring Water, the Skyline Road and Cruson’s Hollow enroute to crossing the Iowa River in the northeast part of Decorah. It was then thought to follow the same route as the old highway from Decorah through Calmar and on to Fort Atkinson.

The Dakota branch of the Sioux tribe, whose main village was the site of the current city of Winona, used the trail while traveling to their temporary villages and camps along the Root River in Minnesota and the Iowa and Turkey Rivers in Iowa. The warlike Fox-Sauk tribe, who had moved west from the Ohio Valley, traversed the trail while attacking the Sioux. By 1780, the Fox-Sauks had forced the Sioux out of their Iowa lands.

In the 1830s and ‘40s, the United States government moved the Winnebago tribe onto land in northeast Iowa that also extended into what is now southern Fillmore and Houston Counties. The Winona-Fort Atkinson Trail was an important Winnebago route to the Indian agency at Fort Atkinson. The tribe last traveled the trail as the government moved the Winnebagos again to another reservation near Long Prairie, Minnesota.

The Chippewas, who had previously supplanted the Sioux near Mille Lacs, used the trail while eventually driving the Sioux out of southeastern Minnesota by 1851.

The native American highway was part of the lucrative French fur trade. France, the first European nation to claim the interior of the continent, sent explorers, trappers and missionaries. The French did not settle in the area but lived with and bartered with the Indians, especially for furs. Jesuit missionaries were active among the Sioux in southeastern Minnesota.

Later during English control, Indians traversed the trail to trade furs at Prairie du Chien (Wisconsin). Later yet, the American Fur Company controlled the fur trade from Prairie du Chien. Future Minnesota politician, Henry Mower Rice (whose name was given to Riceford, Minn.) traded with the Winnebagos from a camp three miles south of Decorah.

After white settlement, mail carriers used the ancient route to take mail by foot from Prairie du Chien to Fort Snelling (now in the Twin Cities). Public documents called it the “Government Trail” when traveled by military and scientific explorers,

Another trail branched off south of the Root River to Caledonia and then south to Portland Prairie and into Iowa to Waukon, Rossville and the Yellow River.

The Winona-Fort Atkinson Trail was well worn when settlers in oxen-drawn covered wagons arrived in southern Minnesota in the 1850s. Settlers near Spring Grove had come up the trail from established settlements in Iowa.

Southeastern Minnesota was no longer Indian territory after 1851, but settlers reported seeing long processions of Indians walking the trail in the mid-1850s. The story of the largest recorded migration, the removal of the Winnebagos, follows next week.

This article is based on the writings of Percival Narveson.