The question frequently arises as to how the village of Money Creek got its name. One tale of floating bills persists, but I have not yet seen an explanation for the previous names of Clinton and Hamilton. The curious name of the creek finally became the name of the village when the first post office could not use Hamilton, the name of an already established post office.

The legend lives on about a pioneer land-seeker attempting to dry out his pocketbook and paper money after an unfortunate dunking in the creek. The bills were placed on a bush to dry but later were blown back into the stream. Some floating funds were not recovered; the stream and later the township and the village were named Money Creek. 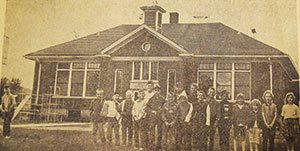 The village, located six miles north of Houston along highway 76, lies in the creek valley – amid farmland between nearby, picturesque hills in the northwest corner of Money Creek Township of Houston County. In recent years, it has been known for popular campground Money Creek Haven and four-hooved movie star Cody the Buffalo (1990 Best Picture Oscar Dances with Wolves). But 19th-century neighbors knew about bricks from Money Creek.

John Campbell and Nathan Vance ventured from Wisconsin into the valley in the early 1850s – maybe more than once. In the spring of 1853, Campbell planted corn and potatoes. One source indicates Campbell built a shanty and Vance occupied an abandoned Indian wigwam. Another source says both sheltered in the wigwam before both could move into the shanty. That first spring, the men were frightened by an “eruption of Indians,” who arrived “yelling and whooping in a most blood-curdling and hair-elevating way.” But the raiders peacefully departed after receiving a few gifts.

In the late fall of that year (1853), the men returned to Wisconsin. The following spring, Campbell returned to the shanty with his family plus cows, oxen and pigs. He began constructing a mill, allegedly to have better claim to the acreage when it would be authorized for sale. After purchasing the property, Campbell completed the primitive mill. His 320 acres would later include the village of Money Creek. 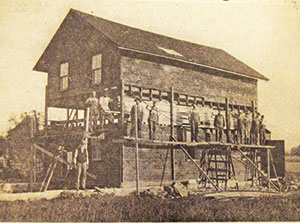 Vance and Campbell were not the only settlers arriving in that spring of 1854. The mill would become a successful enterprise. Farmers would sometimes have to wait a day or two for their grist. They were known to sleep in Campbell’s log house, in the mill, under their wagons or in the open.

Campbell, a native of Scotland, who had emigrated from Scotland at age five, platted the village (calling it Clinton) in 1856, the same year a schoolhouse was built. Campbell was still a Money Creek resident, according to the county history of 1882. Vance farmed, operated a store and engaged in milling before moving his family to Dakota.

While the first settlers came west from eastern states, often by way of Wisconsin, Norwegian immigrants would soon come to the township in considerable numbers.

In May of 1858, the first town meeting (Hamilton) was held with 37 voting. The 1882 history listed two churches, a graded school, two blacksmith shops, a carpenter shop, a flouring mill, a Masonic Lodge and a store/post office. The post office lasted until 1935 when the store owner moved to Houston. At one time, there was also a creamery, a town baseball team and a race track. An 1871 newspaper article refers to the Money Creek Philharmonic Music Association performing every Tuesday at the Baptist Church.

Mills were prevalent economic ventures. But brickmaking became the most prominent single Money Creek business. Stephen Robinson began manufacturing brick, first molding them by hand. By 1870, he had a machine and business boomed. His bricks were used in the county jail and other buildings in the county.

There was also Money Creek Station, a stop on the Southern Minnesota Railroad. To avoid confusion with the town, it was later called Perkins.

But why the name Clinton? Why Hamilton?