The first gasoline pump at the Black Hammer General Store would pump only one gallon at a time. In the store’s second machine, gas was pumped by hand from an underground tank into a tall above-ground, five-gallon glass globe. Whatever amount of gas the customer wanted would be pumped and then be dispensed through a hose into the automobile. “No electricity, just gravity flow, that’s all,” store owner Baldwin Hanson told a newspaper reporter in 1977.

Hanson, who operated the store from 1970 until it closed in1980, was proud and protective of the many antique items from the business during 87 years of service to Black Hammer. Many original price tags were still attached and legible, But they had become far more valuable as relics of days that few remember. Hanson, surely not for the first time, was showing them to someone too young to have seen them before.

He pulled from a shelf a heavy metal chewing gum dispenser. He deposited a penny, which caused a mechanical policeman to strike an open-mouthed criminal over the head. A “tasty chew” should then drop from a slot after the convict had received the blow. There was no longer any gum, but the clever contraption continued to click through the sequence.

Hanson was also proud of a well-worn matchbox dispenser. “See, you can put a penny in there and shove this over, and if there are matches in there, they’ll come out.” Written on the front of the dispenser were the words, “Try it, it works.”

It was difficult to top the story of the small stool. “Here’s a chair we had a lot of fun with,” said Hanson. “It was electrified. A customer’d sit down on these nails, and the Bagley boys’d plug this in, and he’d have to jump right off. I was just a boy then, but I remember it. It’d give you shock about like an electric fence. You’d get caught on this only once.” 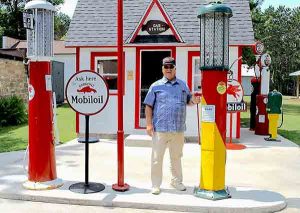 In addition to the entertaining novelties, there were items for everyday use that faded from use in later days. Ready-to-wear white collars, which according to Hanson, were made of “fiberloid,” appeared to be very much like plastic. “In those days, collars had to be starched and ironed,” he informed the younger reporter. “With these detachable ones, you were ready to go.”

As he pulled from a shelf two black derbies with leather hat bands, he explained, “They used to sell hats here,” while also pointing out the $1 price tags. He lamented the poorer condition of other surviving hats.

There was a wooden spigot with a former owner’s pencil-written price tag still legible – 20 cents. “And here’s a keg drill,” said Hanson. “If you didn’t have a hole, you could drill one in a keg.” Horse harnesses hung on a wall in a small room behind the pop machine.

There were many items sold for the earliest automobiles, such as fan belts still in their original packaging. Hanson pulled out a brake drum for a Model T Ford. “Look here, look at the give this has got. They didn’t hold too much.”

Hanson pointed out a can of motor oil. “The Model T always burned oil, so they’d haul a can along to add oil as they’d go. That’s way over 50 years old,” he knew from the brand name on the can – “EN-AR-CO.” That was the trademark of the National Refining Company for its grease and oil products. The company operated from 1882 to 1950.

He dug through a cheesebox until he found it – a tire gauge. “This was a tire tester in the old days. Those old tires had a lot of pressure. This one (gauge) goes from 45 to 105 pounds pressure. If it only came up to here (45), you’d know your tires were low.

He then held up a Prest-O-Lite gas tank, which drivers took along to replenish the fuel in their headlights. The Prest-O-Lite Company, which established one of its 28 factories in Minneapolis in 1912, introduced acetylene gas headlights that were placed on running boards of cars to produce energy to operate the headlights. The sales slogan was, “Brighten the Way – Do not Blind Others.”

Part one about the Black Hammer Store was published in the preceding issue. Another column about Black Hammer Township appeared in the November 22, 2021 edition.