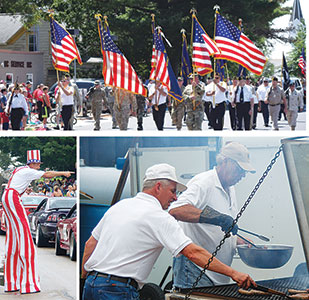 As in many communities all over the United States, in the bicentennial year of 1976, there was a Fourth of July celebration in Eitzen, Minn. Most likely unbeknown to those gathering along the state line that day, it was more than a century after the first Independence Day celebration in the Eitzen area, and the 1976 commemoration would soon inspire a popular, annual, bistate event.

There can be five times as many people in town on Independence Day than on any other day. “Tremendous, way more (people) than expected,” said Dale Meiners of that 1976 observance, which was conducted by the Eitzen business owners.

In that same bicentennial year, a history entitled Bits O’ the Past of the Eitzen Community was published. It stated that the people of Eitzen and Portland Prairie began celebrating the Fourth of July as early as 1865 in “a pleasant grove east of the then unfinished St. John’s Church, now St. Luke’s. Between 200-300 people came, some by team (of horses) and others on foot. Civil War soldiers, recently mustered out, were present.”

Later Independence Day celebrations were sponsored by the Eitzen Band and held in what was Bunge’s Woods north of town. “The band played, there was a ball game. A platform built in four sections was put up, and there was dancing in the afternoon and evening. Ice cream, lemonade and fruit were sold.”

Not only was the celebration in 1976 a restoration of a pioneer tradition, which had started 111 years previous, but it also foreshadowed a resumption of a tradition that has endured until the present. The Eitzen Lions Club was founded in 1979 and the next year began an annual fundraiser on July the Fourth. Starting with that resumption in 1980, there have been 39 flag-flying celebrations – every summer except for 1985 when the main street (Highway 2) was replaced along with sewer and water lines.

The pandemic of 2020 is causing another interruption of most events, except for the raffle and the traditional grand finale fireworks. The plan this summer is for a higher-in-the-sky display, since many people will be viewing the fireworks farther from town than usual.

Charter member Don Meiners said that Eitzen, with a population of about of about 250, has been thronged by as many as 10,000 to 12,000 people attending one of the annual celebrations. With the Iowa state line separating the St. Luke’s Church building from its parking lot, it is always a bistate attraction.

Raffle tickets for large cash prizes plus sales at the food tent (starting with breakfast) and the beer tent have funded Lions Club projects each year. (Don) Meiners said that it is not unusual to go through 700 to 800 cases (approximately 19,000 cans) of beer. He added there was a year in which they ran out of bottled water.

The greatest attraction has been the midday parade, which according to parade committee chairman Lawrence Fruechte, consistently has featured about 100 units. Current mayor Jeff Adamson is always on hand – and also on stilts as Uncle Sam. Dale Meiners said one of the most appreciated parade appearances was Dennis Rud’s team of Clydesdale horses.

Whether traveling on tractors or in tiny trains, there are opportunities for all ages. Fruechte said the well-attended tractor pull began with local farmers cheered on by their neighbors. In recent years, it has been a more high-profile, professional competition. A two-day men’s softball tournament brings many athletes to town as has co-ed volleyball, the later sometimes involving retrieval of the round ball out of the cornfield. There were years of 5K hikes downhill into and back out of Iowa.

Unfortunately, an outdoor concert was a one-time, money-losing venture. The country music of renowned Johnny Paycheck was far better than the weather when an unusually cold night finished with a freeze that damaged cornfields in the valleys.

There have been events that lasted only one year and others that have endured for decades. But dating back to the Civil War era, the Eitzen Independence Day tradition has been enjoyed during three different centuries.