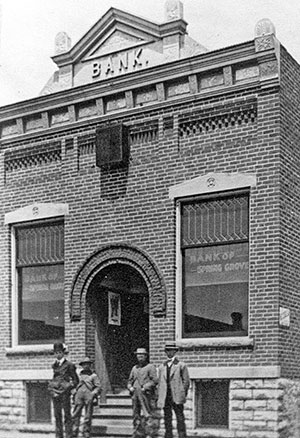 It was 1903, just two years after construction of the new bank building. While walking to work on the morning of October 17, Olaf Narveson noticed something amiss at the bank in Spring Grove. He summoned bank president Nels Onsgard, who discovered the vault had been blown open with nitroglycerin.

An overcoat had been used to muffle the sound of the explosion. High overnight winds evidently prevented neighbors from being alarmed by the blast. Chisels and a hammer were found at the scene of the crime; they had been stolen from Ole Harstad’s tool box at the building site of Ed Myrah’s new home.

Someone had stolen almost $1,000 of silver and $22 in pennies (worth more than $29,000 in 2020). There was $7,000 still in the vault, presumably out of reach of the perpetrators. Before noon, the pennies had been found in a barn. The thieves likely thought they were no longer worth the effort to carry them.

According to the Spring Grove newspaper, “suspicious looking characters” had been seen loitering near the bank a few days before the robbery.

Five men were arrested at Prairie du Chien, Wis. – three on a Saturday and two more the next day. Three would be held in custody for 30 days on charges of carrying concealed weapons. They were also in the possession of more than $300, two new gold watches, nitroglycerin, dynamite, burglar tools and three 38-caliber revolvers. 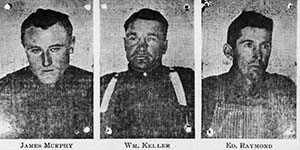 Mr. Onsgard learned of the arrests from an article in the La Crosse Chronicle. He and other witnesses went to identify three men as those seen suspiciously lurking around Spring Grove. Houston County Sheriff Johnson and Deputy Sheriff Connors took the suspects to jail in Caledonia. James Murphy, William Keller and Edward Raymond of Minneapolis were charged with the bank robbery in Spring Grove.

Both Murphy and Raymond had both served time in the South Dakota penitentiary before the crime in Houston County. The past of Keller was not known at the time.

The three were not cooperative prisoners. They unsuccessfully used a saw on the bars of their cells and launched abusive language at jail attendants. After throwing food at the person serving them, they had their rations reduced until their mealtime manners improved.

There was great local interest in the trial, and large crowds attended each day in the District Court at Caledonia in late February and early March of 1904.

At their request, the defendants were to be tried separately. The jury deliberated six hours (from 9 p.m. to 3 a.m.) to convict Raymond, whom Judge Kinsley sentenced to five years at the state penitentiary at Stillwater.

A new jury was in place for the second trial, but Murphy and Keller told the judge they would accept the same sentence as Raymond.

More than a year later, in the summer of 1905, Onsgard and his son-in-law O. K. Dahle found a little more than $700 of the stolen money buried about a foot deep in the ground beneath a bridge near Prairie du Chien. Dahle, an attorney, had received information about the location of the loot. Did the convicts expect the loot to be waiting for them after their incarceration?

The bank attack in Spring Grove came 27 years after one of the most famous bank robbery attempts in the United States, also in Minnesota. The James-Younger Gang, the nation’s most notorious bank and train robbers, attempted a holdup in Northfield in 1876. In that failed afternoon raid, brothers Frank and Jesse James escaped, but two robbers were shot dead in the street with two more being badly wounded.

An overnight heist surely seemed far safer to the perpetrators in Spring Grove, And initially, it was far more successful. Funds were pilfered, and no one perished near the premises. But success was short-lived and ended with a stay in the state prison.

The stately brick bank building faced south on Main Street (Highway 44) on what is now the south side of Viking Memorial Park. It stood only 15 years before being torn down in 1916.

The 1903 robbery would not be last bank heist in Houston County. Another bank has been hit twice. That story follows next week.