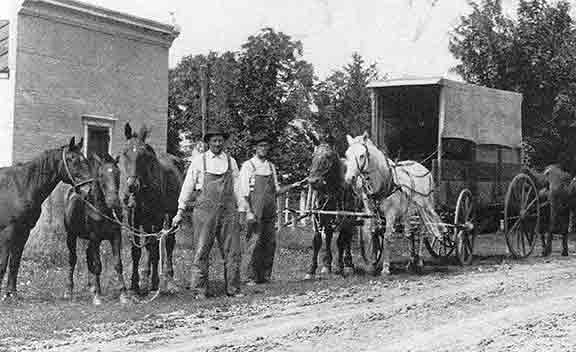 Part four of a series and the

Mustangs moving from Montana to southeast Minnesota? Some took the train. Two Spring Grove men traveled by train to the “wild west” state of Montana where it was still possible to catch wild horses. Knute Lee and John Kjome purchased recently-domesticated (broken) mares and broncos and brought them back by rail to sell to farmers around Spring Grove.

It was 1911 when horses not only pulled farm equipment and machinery but also provided family transportation. Trains ran through Houston County towns, but traveling from the farm to town, you needed a horse-pulled vehicle. Back in southeast Minnesota, those Montana equines sold for anywhere between $35 and $100, which had the purchasing power of $1,050 to $3,000 in 2022.

For Lee, it was his second horse-trading trip out west, but the horses traveled in the opposite direction. A year previous, he had taken horses from southeast Minnesota to sell to farmers in the Dakotas. In between his two successful horse-trading trips, brief stops on a career path – farming during a South Dakota drought, running a restaurant in Spring Grove and managing a hotel in Mabel – had all been unfulfilling. However, business success and personal satisfaction would come when Lee would turn again to his passion – horses. Knute Lee would become a most prominent horseman of Houston County.

On that return trip from Montana, Lee began to dream big about a big feed barn, large enough to accommodate as many as a dozen or more teams where farmers could stable their horses and have them fed and curried while they were in town trading with local businesses. That would require more capital than he had, but he would have enough a year later.

Lee, at age 33 in 1912, kept a few Montana horses when he took over the local dray line in Spring Grove. A dray line was a freight delivery service, which called for a smaller barn and a smaller investment than the big feed barn. Trains were bringing freight into Spring Grove, and it was often inconvenient for merchants to pick up freight themselves. A dray business could be hired to perform that service. Lee would meet the train and load crates and boxes, some of which could be very heavy, onto his wagon for delivery to hardware, grocery and clothing stores on Main Street. If the train freight charge was $1.75, he would write that on the bill and add 20 or 25 cents for his delivery (about $7.30 in 2022 dollars).

A year later, construction was underway for Lee’s feed barn. About six months later, in November of 1913, the barn was open for business. The Spring Grove Herald announced, “What Spring Grove has needed for a long time is a good substantial feed and sale stable, and we can now boast of the finest and best equipped building of the kind in this locality.”

It was an impressive multi-leveled structure, 100 feet long and 34 feet wide with a loft. It was on a slope so the north end had two stories. There was a storage area for equipment, buggies, rigs and surreys. The loft could hold as much as 100 loads of hay. The lower floor could accommodate 50 horses. Business was best on cold winter Saturdays, when farmers came to town along with their hogs for sale. The stable fee was “team with hay, 50 cents a day.” That would be the equivalent of $15 in 2022.

Lee served Spring Grove in many ways – including village constable and school board member, both for 18 years, a fire department member for over 30 years while his dray and barn businesses were prospering for more than two decades, until the mid-1930s, when automobiles and tractors rendered horse labor and travel obsolete. He was a man of his times. His 1939 obituary called him “a lover of children and animals … His one outstanding hobby was the love and care of horses and with their passing, he was somewhat lost in this modern world.”

No longer resembling a big white barn, some of the structure still stands in Spring Grove, extending from the former entrance on Southwest Alley and downhill south to 1st Street SW.

The source for this and the preceding column was the 1993 book “Mathilda’s Journey,” by Robert E. A. Lee, the son of Knute and Mathilda Lee.