Dairying would eventually bolster the economy in Houston County as would growing corn, but neither was the area’s first cash-producing agricultural enterprise. That was wheat.

In the 1800s, farming was a matter of trial, error and adjustment, especially in unfamiliar territory as the nation expanded west with many farmers immigrating from Europe. But agriculture would become more of a science after the 1862 passage of the Morrill Act, which granted land to each state for agricultural and mechanical (A&M) colleges.

Before the 1860s, almost all of the produce was consumed at home. “Rutabagas, potatoes and onions were grown, and a winter supply stored in root cellars,” related Russ Krech, longtime Houston County Agricultural Agent. “Shelves were stocked with home canning of other garden produce and meat.” Grist mills were important commercial enterprises for the use of wheat and flour at home on the farm. 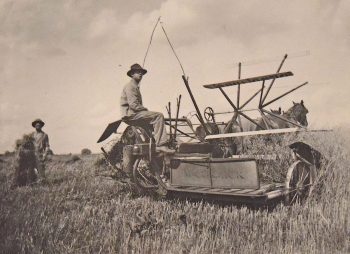 But wheat was also the dominant cash crop in the mid-1860s with Brownsville the main shipping point. By that time, mechanization allowed farmers to plant, harvest and process much more wheat than was possible when only farm animals and hand tools had been available. A threshing machine could thresh 12 times as much grain per hour as six men. During the Civil War (1861-65), mechanization made it possible for many farmers to leave home and serve in the Union Army while those back home could manage the farm with labor-saving reapers and horse-drawn planters.

The United States dominated the world’s wheat production in the late 1870s due to crop failures in Europe and the Russo-Turkish War. The westward expansion of railroads opened up a worldwide market for American farmers. But the wheat boom would not endure. A history of the town of Eitzen noted excessive heat injured the wheat crop in 1878, and after a second wheat failure the following summer, area farmers either abandoned wheat farming in favor of stock raising or moved west to Dakota. By the 1880s, area wheat production suffered greatly due to insects and disease. However, despite these local problems, Minnesota was the leading wheat producing state in 1889. However, wheat prices would drop when India, Russia and Australia increased production, and some European nations placed tariffs on American wheat. In about a decade, the average annual price for wheat fell from 92 cents per bushel to 67 cents.

By the 1870s, corn replaced wheat as the leading crop in Houston County while raising hogs was the first major livestock operation. But growing corn required considerable labor. After plowing and planting, some farmers had to cultivate three or four times to control weeds. Not until the early 1950s would herbicides be able to reduce cultivation by as much as 75 percent.

Early settlers hoped for more than 30 bushels of corn per acre. The introduction of hybrids in the 1930s greatly increased yields. In the 1950s, corn yields might reach 100 bushels per acre. During the late 1980s, Houston County averages were more than 125 bushels per acre. Production could approach 200 bushel per acre with accurate soil tests, commercial fertilizers and narrower row spacing.

Dairying in Houston County began in the 1880s, but did not begin to reach its potential until the 1910 organization of the Caledonia Co-op Creamery, which expanded the market for cream. The need for forage crops led to the rotation of the major crops – corn, oats and alfalfa. The rotation would expand with the introduction of soybeans in the 1960s.

Areas too steep for agriculture had been used for harvesting hardwood. But in the 1880s, some of that acreage was grubbed for extra pastures for herds of dairy and beef cattle.

In the 1880s, the Minnesota farm usually provided the family supply of meat, milk, eggs, fruit and vegetables. Most labor was performed by unpaid family members. The oxen, that had pulled pioneer wagons west and pulled the plows breaking the prairie grassland, had been replaced by horses. They did not have tractors, electricity, radios, telephones or indoor plumbing. However, there was satisfaction with life in the 1880s. They had leisure time for reading and card games. They lived in better houses than the earliest settlers of the 1840s and 1850s, maybe their parents or grandparents.

Primary source: the research of Russ Krech, published in the book, “Caledonia Pride.”