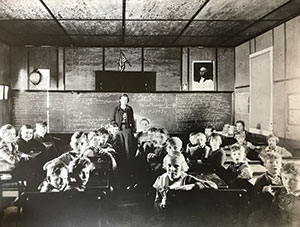 Early schools and churches often began meeting in the homes of pioneer settlers. Simple one-room schoolhouses would often host church worship services before formal church buildings were constructed. It was different for Daley School, east of Caledonia, where a church building became a schoolhouse.

Education began in the home of Timothy Hackett in January of 1856 before a donation party the following autumn supplied logs for construction of a schoolhouse – School District 11, later District 33. In 1880, residents decided to replace their 23-year-old log schoolhouse and did so on a new site – but with an old building.

The Christian Church had been built nearby in 1857, where Rev. E. T. Grant conducted services. Fourteen years later, the last sermon was preached by Rev. Ghent in 1871. Ten years passed before the church building was purchased and moved to became the new District 33 school.

It also became known as Daley School, sitting on a half-acre once owned by James Daley. In a 1935-36 photo, 24 students are seated in front their teacher and a wall-to-wall blackboard below a calendar, a small American flag and a portrait of George Washington. 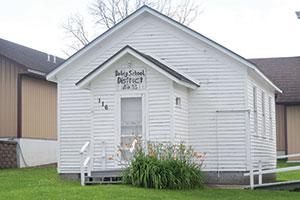 The one-time church building, later-schoolhouse would be moved again – to its third location covering three different centuries. It currently sits on the Houston County Fairgrounds as a memorial to William Daley, a longtime fair board member.  The ownership was legally transferred in 1975 to the County Historical Society. Daley School is among three other pioneer buildings on a complex that also features a museum buing and research center.

Today, the former school site in Brownsville Township a few miles east of Caledonia, on what is now Highway 3, is not marked but is known to some area residents.

One-room buildings may be moved, but usually not cemeteries. With the first church burial in 1857 and left behind in 1881, the Christian Church Cemetery is today on private property on a knoll just off Highway 3 on Ridgeview Road. Unmaintained, it is hidden by vegetation during the summer. An inventory lists 20 burials, 17 with stone markers.

Selma Voight moved into the area about 1928 and was at first homeschooled before attending grades six through eight at District School 33. The next year, she stayed home and went to work. “Not everybody went to high school a hundred years ago,” she said with a chuckle.

She could have cut through the woods but preferred to walk about a mile and a half along the dirt road to get to school. Voigt liked studying history, geography and citizenship, but math – not so much. She said they had good teachers, the last of which was a man named Lloyd Keefe (sp). There would be a “little picnic” on the last day of school.

Jim McCormick began his schooling as a first grader in 1934 when students walked to Daley School, carrying their lunch pails. However, he does recall being towed to school on a bobsled on some mornings when the temperature was well below zero. Students would tote drinking water to school from a nearby farm cistern.

McCormick and three other boys crammed their seventh and eighth grade education into one school year at Daley before their secondary school experience in Caledonia. He graduated from Caledonia High School in 1945.

LuEtta Vertheim Fruechte began attending Daley School when her family arrived in 1937. She walked about a half-mile to school and placed her lunch on a shelf before classes were taught by Edna Lynch. She recalled students sometimes carrying in firewood for the stove.

By the end of the eighth grade, students were well versed in some lessons they had heard repeated for several years with many grade levels in the same room.  Fruechte said going into the large school in Caledonia for ninth grade was a “scared-to-death” experience. But she survived and graduated with the Caledonia High School Class of 1944.