The first high school education in Houston County was offered in Caledonia, as late as 1868, by Yale University graduate, the esteemed Julius Emmons. The next year, the first edifice, constructed exclusively for high school students, opened under the direction of Caledonia’s Trinity Episcopal Church, its rector Rev. William R. Powell and Bishop Whipple.

The Minnesota state legislature had authorized this parochial institution in 1856, but it was not ready for operation until 1869 when it opened as the Caledonia Collegiate Institute. Powell secured funding to erect a large school building on church property at the intersection of Badger and Grant Streets.

At the time, the Episcopal clergy, in the tradition of earlier Jesuit missionaries in southeast Minnesota, sought to save the souls of the Native Americans. Part of the second floor of the school building was set aside as a dormitory. But no record has been found indicating any Indians ever boarded at the school.

Financial concerns plagued the first three years and three administrators of this early educational effort. With a lack of students and financial support, Powell had been unable to meet expenses in 1869-70. He turned over the reins to his successor Rev. Mr. Street, who after the next school year (1870-71), would close the school due to the same economic dilemma. E. W. Trask took over the next year (1871-72) before leaving the field of education.

However, success would finally be achieved when William Dunbar Belden, Caledonia’s first graduate from the University of Minnesota, returned to his hometown. At the urging of leading citizens, Belden established in the same building what then became a non-denominational school – the Caledonia Academy. 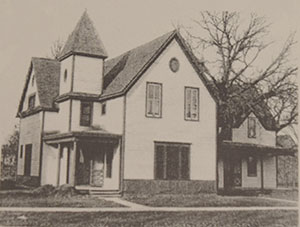 Belden oversaw a two-tiered program. There was a four-year, classical course of study to meet the requirements for admission to the University of Minnesota for those in pursuit of a professional career. There was also a practical program, which conferred a first-class teaching certificate on those desiring to teach in the area grade schools. The extensive publication Caledonia Pride claimed it was the first school of its kind in the state outside of the large cities.

A Caledonia newspaper advertisement listed the curriculum in 1879. In the first year was Latin, arithmetic, English grammar (analysis and parsing), United States history, spelling and reading plus compositions and declamations.

In 1875, the building was repaired and remodeled with an approximate expense of $1,000. Camp’s maps, Cutter’s charts and a globe were purchased and a telescope was obtained (power sufficient to see the rings of Saturn).

The first commencement occurred in 1877. One source refers to eight graduates; another source named five graduates Three would graduate in 1879, and two graduates would follow a year later. In 1878, there was an enrollment of 55 students.

The Academy was discontinued in 1880 when a public high school became available to fill the gap between grade schools and the university. In 1900, the Academy building was separated into two sections, the smaller moved about 20 feet south to be a private residence, which still stands in 2020.

In 1878, the state legislature established a High School Board. The Independent School District #42, including the village of Caledonia, was established in 1880.

Previous to the specific high school education in the 1860s, there had been village schools. The first, established in 1854, met in a building meant to be a store in the winter of 1855. By 1860, there were 39 students crowded into the small building,

Those crowded conditions prompted some to open schools in private homes. A new larger schoolhouse was built in 1864 on the corner of Decorah and West Washington Streets. It would house the village school for 20 years – until the public school era of the 1880s.