This farmhouse was a residence to which few aspired. However, many unfortunate citizens were indeed fortunate to find a “home and family for 45 years” with Cyrilla and Valentine Esch at the Houston County Poor Farm.

In 1901, the county decided to replace a condemned “poor house” near Hokah with a spacious replacement near Caledonia — built in 1903 with brick from Spring Grove. During 74 years of operation, there were only three overseers – Peter Kline for the first 17 years, John Krier for the next 12. Valentine Esch (age 25) and wife Cyrilla (age 23) came as administrators in 1932.

During the Great Depression, the couple was “glad to get work,” Mrs. Esch told the La Crosse Tribune. They were paid $60 a month – “good money then,’ she told the Winona Daily News. There was job security but also plenty of exhausting work – long days, sometimes short nights with resident illnesses. However, for this couple, it was also a calling.

The commissioners planned to house 24 tenants plus the overseers. Mrs. Esch told the Tribune that there had been as many as 28 during the early years, mostly elderly and indigent. There would also be those with mental challenges. “You couldn’t turn ‘em away.”

Doctors made house calls. But poor farm residents did not qualify for hospital care. “You never took ‘em to a hospital,” said Cyrilla. ”…you just nursed ‘em till they died. I was cook, nurse and everything.”

She baked 28 loaves of bread every other day. After breakfast, residents took baths and beds were made. The big meal was at noon. “We always had a roast or chicken or something like that,” she told the Tribune. “And we always had dessert.“

Mrs. Esch would wash, clean, and can fruit and vegetables from the garden. Before freezers, she would can 1,000 quarts a year.

Valentine (Folly) toiled outside on 39 acres with flower and vegetable gardens plus farm animals. Said to butcher 23 hogs at a time, he built a concrete smokehouse for curing. Son Mark recalled bologna and German blood sausage being popular items. 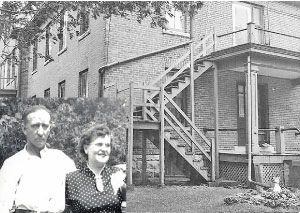 There was cemetery space for 40 burials; 10 interments were recorded during the first seven years. The exact total may be lost to history. Mark remembers most burials (all but a couple) during the Esch years being elsewhere. No wooden and standard grave markers still stand.

Cyrilla ably administered the home almost all of her working life. Congressional creation of Social Security made county poor farms impractical. In 1944, the couple purchased the furnishings, leased the farm and changed the name to Evergreen Rest Home – referring to the numerous pine trees, many majestically lining the driveway.

A family atmosphere was created by the Esch family of six. They came with one young child and one on the way. All four children grew up on the farm; all worked along with their parents providing care for a much larger family. In time, grandchildren also lent a hand. All birthdays and holidays were group celebrations.

Tenants who were able would help with chores. Weather permitting, they could sit or walk outside. Before television, there was radio as well as cards, checkers and needlework. Church groups visited with food and engaged the residents with games and conversation.

After 28 years, the family finally planned a vacation, but Folly died of a heart attack in 1960. For nearly the last half-century of operation, the Esch family – Cyrilla as a widow the final 17 years – was the guiding force in providing those in need with not only a residence but also a friend. When crippling arthritis forced her retirement in 1977, the last 16 residents went to area nursing homes, boarding houses or a home for those with mental disabilities. Some were from Fillmore County, which according to Cyrilla, did not have a boarding house of this type.

The county sold the farm. After sitting vacant for 12 years, the big house was razed in 1989. However, current owners have preserved the windmill, smokehouse, children’s playhouse and cemetery.