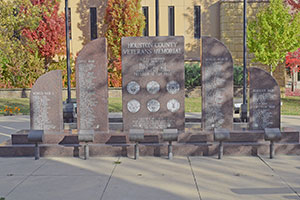 “What a pleasant experience to be halfway around the world and see someone I knew. It made Houston County seem a little closer,” recalled Ron Strub about one treasured memory from his mid-1960s service as an Army medic in Vietnam. “There were a lot of times I knew someone was looking over my shoulder and taking care of me and keeping me safe.”

During a Sunday church service in a tent at base camp, Strub said, “I had a strange feeling that someone was looking at me… such a strange feeling that I just had to turn around, and there stood John Palen looking at me. My graduation class at Caledonia was only 41 people, and there stood one of them. I did not even know that John was in the 1st Cavalry or even in Vietnam. But there he was looking at me, and I felt it. What a pleasant experience… made a 20-year-old kid from Caledonia happy that he had an opportunity to go to church that Sunday.”

In 2000, Strub, Palen and others able to return from war helped Houston County commemorate those not as fortunate. Frank H. Sheldon from Mound Prairie and Harold Arnold Foss of Spring Grove both died in France in 1918 toward the end of World War I. The businesses in Houston were closed during the funeral services at the high school for Capt. Ralph M. Olson, the pilot of a fighter plane that crashed in Korea in 1950.

Roger Lewis, of rural Caledonia, spent his 21st birthday heading to Vietnam on a ship where all were asked to list their height. He felt that was for the dimensions of a casket, if necessary. He died in a 1967 ambush, the first Houston County death in that conflict.

Since the 1860s, many have left their loved ones in southeastern Minnesota to serve their nation during times of war and peace. Those who did not return to Houston County, those who sacrificed their lives in battle or by accident or illness were honored in 2000 with the Houston County Veterans Memorial on the grounds of the county courthouse.

The planning for this project began in July of 1997 when Houston County Commissioner Dave Corcoran met with a small group in La Crescent. A formal seven-person committee included David Klinski, a Civil War historian from Union Township, whose research provided the names of fallen soldiers. All the veterans organizations enthusiastically supported the project, including some generous financial contributions.

The memorial features five pillars of stone, erected by Wieser La Crosse Monument, to reflect the arch of the courthouse windows. Lit by spotlights at night, the monument is accompanied by three flagpoles for the United States flag, state of Minnesota flag and the POW/MIA flag. Inscribed were the names of 207 Houston County men and women, who died during military service. From the Civil War, there were 77 names, Indian Wars 6, Spanish-American War 3, World War I 35, World War II 54, Korean War 7, Vietnam War 14 and Non-War Time Deaths 9. During the last 21 years, a few names have been added.

The groundbreaking took place in 2000 on May 30 – the holiday once called Decoration Day, now known as Memorial Day. The dedication was on Veterans Day, November 11, 2000. The program started inside the Caledonia City Auditorium with approximately 1,000 attending. A Marine Corps Color Guard advanced the colors. The 34th Infantry Band of the Minnesota National Guard presented patriotic music. The keynote speaker was Brigadier General John Schuster of the 88th Regional Support Command.

The ceremony then moved outdoors to the monument on the courthouse grounds. The inscribed names were read aloud, and brief remarks were made by the Commander of Fort McCoy, Col. Michael Staszak. There was a 21-gun salute by the firing squad from American Legion Post 595, La Crescent. It closed with the playing of taps.

The planning generated another project. Committee member Ron Levendoski collected stories from veterans and their families. Originally planned as a brochure for the dedication, it became a booklet and then a 120-page book and finally an expanded second printing – the source for this column.