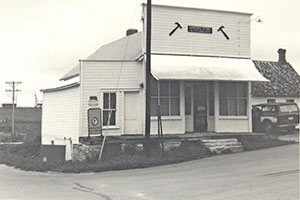 The commencement of commerce in the Houston County hamlet of Black Hammer dates back to the 1860s when blacksmithing and storekeeping became a business plan. Gunder Mathison owned a blacksmith shop while also operating a general store before selling it to Bernt Hanson, another blacksmith. Thrond Jacobson, who purchased the store in the 1880s, restocked the shelves by carrying goods on his back all the way from Spring Grove.

Jacobson thriftily observed the maxim that, “A penny saved is a penny made.” Before becoming a storekeeper, he was said to have walked with eggs to Spring Grove, where he was told that stores in Caledonia were paying a penny more per dozen. He then plodded on to Caledonia, covering more than 20 miles before returning home. Jacobson closed the store in 1913.

By then, there was another store in a frame building, which is still a recognizable landmark. Except for briefly housing an antiques shop, it has been a private residence since the store closed in 1980. The exterior still has the appearance of a country store. It was not the first store in town, but the one with the longest tenure – operating for 87 years with at least six storekeepers. In 2021, it is still fondly remembered by many lifelong residents.

It was the gathering place and social center of the community for most of the 20th century. Games of euchre were regular events, especially on winter days when work on the farms was not as demanding. There was a checkerboard that could be balanced on the knees of up to four players who used it a card table. The store would be opened briefly after Sunday services for the convenience of worshippers before they returned to the farm. It would also open when family reunions took place at the church.

In 1893, this second store was constructed by a carpenter, Hans Hanson, in partnership with Erik Karlsbraaten, the latter selling out soon afterward. Hanson operated the store for a decade until 1903 when he sold it to Oscar Bagley, who maintained the business for 49 years.

Bagley, who had previously owned a store in Newburg, was likely the most well-known country storekeeper in the area. In nearly a half-century in Black Hammer, he saw many changes in the business. In the early years, he hauled his merchandise from Spring Grove by horse and buggy. Eventually, trucks delivered directly to Black Hammer. At one time, many items were sold by bulk and had to be weighed by hand. Later, customers could select meat from his refrigerated display case.

When Bagley’s health began to fail in 1952, his son Milton ran the business for three years until Oscar’s death. Milton then sold the store to Sigurd Evenson, who owned it for 15 years and replaced the wood-burning stove with a furnace.

When Baldwin Hanson purchased the store in 1970, the enterprise was back in Hanson hands; Baldwin was the nephew of founder Hans Hanson. Although he was born a dozen years after his uncle Hans had sold the store, Baldwin was aware of the family connection. That family history and members of his own nuclear family – sons Don, Cletus and Gary – influenced his decision to become a storekeeper. Baldwin, as a farm owner, milked 40 cows before buying the general store.

In 1977, Baldwin told the Agri News, “I drove by the store on my tractor, and Sig said he wanted to sell the store. He said ‘Either you buy it or I’ll close it up.’ I said, ‘I can’t. I’m farming’ But I went home, and the boys said I should do it. So, I sold my farm to a neighbor and bought the house across the street (from the store). I tried farming and running the store for three years, but that didn’t work out; you’ve got to do one or the other.”

Baldwin would drive to La Crosse every Wednesday to pick up grocery and specialty items. Before he added a cooler for milk and pop, those refreshments were kept cool in the cellar. Below a trap door in the floor, there were wooden steps customers would descend to select a bottle of pop.

Early Black Hammer Township was the subject of this column in the November 22, 2021 edition of the Fillmore County Journal.