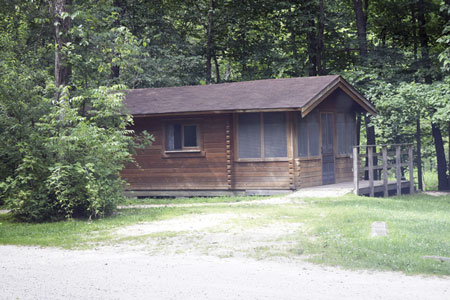 In the 1890s, Farmer Oseth made a daily trek from his homeplace down into the valley with a yoke and pails of milk and cream to the what became known as the Big Spring, where his wooden tank was used as a cooling system. Others, who came by horse-drawn vehicles down a rocky road, began using the tank to cool their butter, melons and beverages. The water of Big Spring maintains a nearly constant temperature of 50 degrees Fahrenheit.

In the early part of the 1900s, the Big Spring area — just west of Caledonia — became a recreation and camping destination. The Houston County Rod & Gun Club had its first annual picnic in Beaver Creek Valley in 1933. A horse-drawn wagon, known as Black Maria, was known for transporting youth campers to the spring. There was the danger of a late-night summer thunderstorm causing a flash flood in the narrow valley.

Flash floods remain a threat in the 21st Century, but a flood-control project contributed to present-day camping in what is now Beaver Creek Valley State Park. In 1934, State Representative John R. Trisch recommended the site to state officials. In 1935, the valley became part of an $8.5 million flood control program of the Works Project Administration for the unemployed during the Great Depression.

The valley consisted of privately-owned, wooded lots when land acquisition for the park began in 1936 and continued for several years. Work began in 1938, which a local newspaper reported it would entail up to 10 men building a dam, two bridges and a road. Early progress was slow with only the entrance road completed by 1940. Picnic grounds and a few trails came next, but it was not until after World War II that the campgrounds were ready. 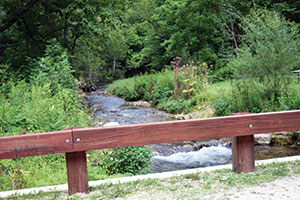 In the late 1950s, there was concern that private land ownership and lumbering on the bluffs above might result in erosion. The state legislature authorized expansion in 1963. There was landowner opposition, but the scenic park now covers 1,200 acres.

Just outside the park, Schech’s Mill is a tourist attraction as the last water-powered mill in Minnesota still operating with its original equipment. Dating back to 1875-76, two-story grist mill has been owned by the same family since 1887.

Even before homestead settlement in the 1850s, area inhabitants had long enjoyed the valley. Archaeological field surveys indicate that a Native American village had been located on the north end of the park. Some prehistoric stone tools have been found.

The park features a heavily-forested, steep, narrow valley — up to 250 feet deep in places — carved by East Beaver Creek, which joins West Beaver Creek at the north end of the park on the way to the Root River. It is representative of the Driftless Area, which remained ice-free after three successive ice ages. Not affected by glaciers and polar ice sheets, Driftless Area streams and rivers have had a longer time to cut into their beds and create deep valleys among high ridges.

Beaver Creek Valley’s Jordan sandstone walls and dolomite ridges are both water-permeable, which results in the park’s numerous springs. The constant temperature of the spring water prevents freezing and helps sustain a striving population of native brook trout and introduced brown trout. Watercress also thrives in in the mineral-rich water. Bearing white flowers in the summer, watercress remains bright green all winter.

To improve the habitat for trout in the mid-1990s, fishery staff were placing rocks along the banks of the creek to prevent erosion and create overhangs where fish could hide. But birdwatchers said this eliminated nesting sites of Louisiana water thrushes and cerulean warblers. After public debate, wildlife management compromised by modifying the upper and lower sections of the creek while leaving alone the middle section.

Beaver Creek Valley State Park was rated one of Minnesota’s top four state parks by the Project 80 computer analysis. Because the other three were considerably larger parks, Beaver Creek Valley can be considered the state’s top small state park. Despite the valley being so narrow, there are 42 drive-in campsites, six walk-in sites and a camper cabin along with eight miles of hiking trails.