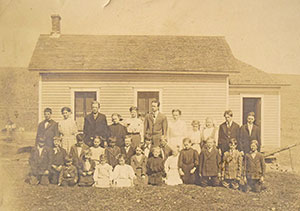 Sometime before Minnesota became a territory in 1849, there was a tale of a trapper who roamed the area that included what later became Black Hammer and Yucatan Townships in Houston County. During extreme weather, he would ask for food and shelter overnight at whatever settler’s cabin he could find. Other information about him, even his full name, was not known. But when asked about his name, he was known to reply, “Just say that Jim the trapper made his rounds.”

Black Hammer was not one of the original 1848 Houston County townships. But early the next year, it was created from what had been parts of Yucatan and Spring Grove Townships. The organizational meeting was held April 5, 1949, in a school house where Helge E. Solberg’s motion passed for the township to be named “Clinton.” However, state authorities rejected that name as there was already a Minnesota township with that name. But “Black Hammer” would be a name not yet nor probably ever to be duplicated – unless a resident moved on westward (as many early settlers did) and attached the name to a future settlement in another territory.

The most prominent feature of the local landscape was a hill known as Black Hammer, a name derived from the Norwegian words “sort,” meaning black, and “hammer,” which as in English, means a pounding tool, but which also in Norway sometimes referred to a hill or bluff shaped like a hammer.  Early histories said Knud Bergo, a pioneer of Spring Grove Township, could see this bluff from his cabin. Early one morning, after the hillside had been blackened by a prairie fire, it reminded him of a hill in his native Norway known as “Sort Hammer” – or in English, Black Hammer.

The Preemption Act of 1841 permitted a qualified “squatter,” who as a head of household lived on and improved government-owned land, would be able to purchase up to 160 acres for $1.25 per acre before the property would be offered for sale to the general public. Thought to have been the first to stake out a claim for land in the prairie part of the township was a speculator named Edwin Stevens, who was also one of several millwrights who searched the area for sites where waterpower was suitable for a mill. Having come from Wisconsin and later Winneshiek County, Iowa, Stevens staked out a claim in what became Section 21 of Black Hammer Township. After he moved on to what became Yucatan Township, his original 1852 land claim would a year later become the home of the Knud and Cecelia Ike, thought to be the second Norwegian family after the 1853 arrival of Torkel Aageson Rosaaen.

Norwegian immigrants were the most numerous settlers of what became Black Hammer Township, where the rugged terrain likely reminded them of the hills and valleys of their native Norway. It appears to have been a continuation of a movement of settlers that came to Allamakee and Winneshiek Counties in Iowa in 1850-51, then into what would become Spring Grove and Wilmington Townships in 1852 and on into the Black Hammer area in 1853. The inflow continued until the late 1860s.

By the late 1850s, there were settlers on Riceford Creek in Section 29, where David Soper constructed a sawmill that would soon sit close to residences for millworkers. John McCabe would die during Civil War military service. Mathias Nilsen was best remembered for his nickname, “Mathias with the Fork.” He never went out after dark without his pitchfork in hand. It remains a mystery whether he suffered from night blindness or was prepared to fend off rattlesnakes or Indians, the latter still common in the Riceford Valley.

The mill operated from 1857 until the flood of 1866. Without warning on the night on August 6, 1866, the Riceford and South Fork Valleys were devastated by a wall of water that carried away the mill and all the homes, except that of the Tannen family. Not all had time to flee to higher ground. Mrs. McCabe and her two children, along with their home, were swept downstream and drowned. The mill and homes were not rebuilt. The Tannen family remained until the 1890s.

This information came from the research and writings of Spring Grove area historian Percival Narveson (1899-1972).