“The present county poor-house is a very poor house indeed… a rickety old affair” said the Caledonia newspaper in 1892. Eighty-nine years later, the Houston County Poorhouse was described as a “model of beauty and utility” when nominated for the National Register of Historic Places.

In between those two assessments, the county had decided to replace the state-condemned poorhouse. For a residence, that first 1878 county farm converted a wayside tavern in Union Township southwest of Hokah. Today, that older site is at the junction of Highway 44 and County 20.

H. H. Hart, secretary of the Board of Commissioners, wrote of his 1890 visit to the old poorhouse, “entirely unfit for use… old and dilapidated so that it is impossible to keep it free from vermin… There is no place where the inmates can take a bath and of consequence do not bathe.”

In 1901, the commissioners determined the residence was not worth improving and decided to construct a new, up-to-date, solidly-built brick poorhouse. They offered the electorate a choice of four sites. In the spring of 1902, voters narrowly favored rural Caledonia over the present site, 876 votes to 867.

The new location, close to the county seat, would be more convenient for oversight, especially during winter. A 40-acre farm was purchased two miles west of Caledonia, where the new dwelling was built in 1903 at a cost of $10,000. It would stand for 86 years. 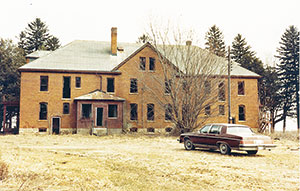 There were separate quarters for men and women along with the overseers’ apartment, wide center halls, a well-ventilated attic, clothes closets, well-equipped bathrooms and living areas separate from sleeping quarters.

Providing for the poor in Minnesota began before statehood when the territorial government operated under the laws of Wisconsin. With statehood in 1858, Minnesota tried something different for the first four years. The legal responsibility for poor relief lay first with the township and then with a larger district arrangement before reverting to the old territorial model of county authority.

At first, counties provided monetary assistance for needy individuals to live at home or in boarding houses. But as county populations increased, group settings became a more economical arrangement with overseers hired to operate the facilities, which often included agricultural land. The tenants could therefore be as self-supporting as possible. And in an agrarian society, land could be a wise investment and was expected to increase in value as the population grew.

It was the last refuge for the penniless in old age, the physically handicapped and those who were mentally ill or deficient. Not all residents were elderly; all ages were admitted.

However, the 1935 Social Security Act created the Old Age Assistance (OAA) program which gave poor, elderly people cash payments, regardless of their work record. But assistance could not be given to persons residing in public facilities. So county farms were no longer necessary.

In 1944, overseers Valentine and Cyrilla Esch purchased the furnishings and rented the building from the county. They changed the name to ”Evergreen Rest Home” in reference to the pine trees lining the driveway and surrounding the house.

After his death in 1960 and her retirement in 1977, the county sold the property. The house was vandalized and deteriorated while standing vacant for 12 years before it was razed about 1989.

Current owners reside on the property, still use the old well and have maintained the old smokehouse and windmill and kept the cemetery free of trees. About 30 Norway pine trees still line the driveway.

Ethel McClure described poverty in early Minnesota to be “generally considered a disgrace, and while the government could not let its citizens die of starvation or exposure, neither was there any effort to make relief palatable or even respectable.”

The 1878 start in Houston County did quickly prove to be unpalatable, far from respectable. But the well-planned 1903 replacement and the overseers – especially during the 45-year tenure of the Esch family – were worthy of praise.

Next week, we will get a glimpse of what life was like from 1932 to 1977 when the Esch family made their desperate, “poor” residents part of the family. And some of an appreciative community also helped make the poorhouse a caring home.