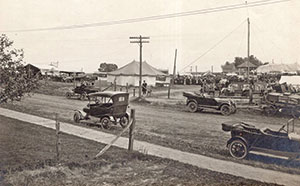 First of a two-part series.

This summer of 2020 is not the first time for the Houston County Fair to be canceled. Health concerns have now caused three cancelations and a move to another city.  The 1925 fair was not held due to a nationwide epidemic of infantile paralysis (polio), the same disease that caused cancelation in 1946. However, there were junior fairs held later in both of those years, making 108 consecutive years of some fair activity – until the pandemic of 2020.

In 1925, all public gatherings were halted, and school was postponed until September 7. The junior fair in late October suffered through cold and snow. Entry clerks took breaks to warm their hands over small oil heaters in the fair office.

The polio epidemic of 1946 forced cancelation of the county fair and also the Minnesota State Fair. The State Department of Education delayed school opening for two weeks.

In between in 1934, the fair was moved to Spring Grove, because the fair board was unable to prevent the Civilian Conservation Corps (CCC) camp being located on the fairgrounds in Caledonia. One source says there was a disagreement over land leases, maybe for additional land needed for fair activities. However, the Spring Grove newspaper said there was fear of an epidemic. There had been an outbreak of cerebrospinal meningitis at a CCC camp in Missouri, which may have originated in a Minnesota camp.

Disease prompted the statewide cancelation of all swine shows in 1951.

Annual county fairs began in 1886 with the organization of an Agricultural Society. In September, the Society purchased 40 acres of land in Mayville Township for $1,200. An immediate, ambitious project included a ball diamond and a racetrack in addition to buildings before that first “annual” celebration. Those fairgrounds were east of the current swimming pool.

The Houston County Agricultural Society reorganized in 1912. According to Caledonia Pride (2004), the new constitution and bylaws were written by “people with a dim view of horse racing and race track betting.” Annual county fairs resumed in 1912 and were held during 106 of the next 108 years (all except the polio years) through 2019.

All but one of the 123 Houston County Fairs have been in Caledonia (1934 Spring Grove). But not all were held on fairgrounds. With no fairgrounds when activity resumed in 1912, the next four fairs were held downtown. Livestock exhibits were housed at Dr. Whitbeck’s stables with other exhibits at city hall and amusements on the streets.

In 1915, Houston County purchased seven acres, a fairground that has expanded to 14.51 acres, some owned by the Agricultural Society.

In November of 1971, strong winds blew part of the grandstand roof across the street, damaging a home. Three young Fitzpatrick brothers were fortunate to escape injury despite debris falling onto their moving car.

Rainfall is not uncommon during the fair, but thunderstorms ended the fair early in 2007. Downpours canceled some Saturday events. By late Saturday night, flooding had become an emergency with some communities being evacuated.

The fair called off Sunday activities, but flooded roads and damaged bridges prevented many exhibitors from picking up their animals, some of which were taken to nearby farms for several days. Some stranded 4-H members stayed with friends. In addition to financial losses, there was extensive damage to the fairgrounds and buildings.

County fairs were held in October until 1915 when dates were moved to September. But after several rainy Septembers, the fair dates were changed to late August, where they have remained.

A look back continues next week with favorite fair events and memories of a fairgoer in the early years.