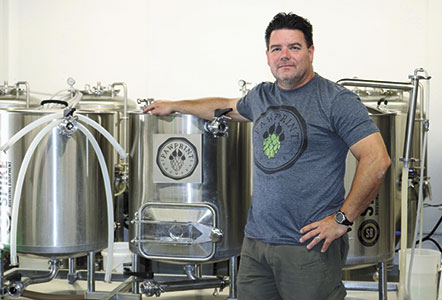 Kenison has spent the majority of his life serving the public and the time came when he wanted to serve the public in a much different capacity.

Having served in the Air Force and in law enforcement simultaneously for 25 years, Kenison felt a dissimilar future taking shape.  He served in Iraq with the State Department from 2007-2009 training Iraqi police, and his last 10 years in law enforcement were spent as a K9 handler.

“I just felt in myself that that career was just coming to an end,” states Kenison.  “I was just getting really tired of carrying the gun belt and just being in law enforcement,” he explains.

“I was trying to find a way I could retire from law enforcement,” he says, and tried his hand at a few things including getting his real estate license but nothing really stuck.

“I was home-brewing for three years — I just kind of got the bug to try to create my own beers,” notes Kenison.  As his family and friends tried his home-brewed craft beers, he received many compliments.

“I thought, maybe I can do this,” states Kenison.  “This opportunity came up,” he comments, and, “everything came together” to make it happen, he adds.  He leased the space in April of 2019 to begin his new adventure.

Kenison and the property owners worked together to make improvements such as new flooring, fresh paint and more, but the biggest project was completing the “Brew Room” which was completely gutted and set up for what is now an impressive brewing system.

The business opened on January 24, 2020, in the former Coyote Club building on main street in Chatfield, Minn., was named PawPrint Brewery by Kenison to touch on his past work with K9s.  Many of the craft beer names are a nod to dogs and also to the military including Water Dawg hard sparkling water, K9 Kola extra pale ale, Old Yeller soda cream ale and The Minuteman red ale.

With 12 taps, customers at PawPrint Brewery will have a wide variety of craft beer options, and of added interest, customers can visit the Untapped app and rate the beers.  New options at the brewery are hard seltzer slushies, which sound perfect for sipping on a hot summer day.  Non-alcohol drinks are also available. 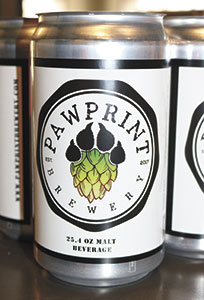 PawPrint Brewery does not have a food license, but they do offer pre-packaged snacks including Three Mad Poppers Gourmet Popcorn and a variety of chips and pretzels.  But, a big plus for customers is that food can be brought in and eaten at the brewery.  Customers can pick up food from local establishments (some offering discounts with a receipt from PawPrint Brewery) or even bring in your own picnic lunch to enjoy inside the brewery or out on the patio.  Kenison often has food trucks on site also, giving customers another option.

Whether having a picnic with family or partaking in some cold refreshments with friends on the patio, take time to play the outdoor games including Connect Four, Jenga and Checkers.  The games were enjoyed by many at Tweite’s Pumpkin Patch in Byron for years, and when they closed the games were included as part of their auction.  Kenison purchased them and refurbished them for use on the patio at PawPrint Brewery.

Since opening, Kenison said although business has not been quite what was expected due to the COVID-19 pandemic, the local businesses and residents have been very supportive.  “It was the community that kept us going through that time” of the shut down, explained Kenison, saying, “it really helped us” during a tough time.

Kenison is also very supportive of the community and businesses.  As well as working with local restaurants and businesses to provide food options for customers, he is also purchasing the majority of his hops from local supplier Civil Sass Hops.

Now that PawPrint Brewery is open to customers once again following the pandemic shutdown, Kenison is happy to be able to talk with his customers.  “I try to make my beers to what they want,” he explains, so to be able to get the customers feedback and suggestions is very important to him.

Stop by PawPrint Brewery and try the craft beers, play some games, visit with friends and don’t forget to bring your dog along for some social interaction, as they are welcome on the patio, or as they call it at PawPrint Brewery, the “petio,” where dogs are sure to receive a lot of attention from the owner and other customers as well!

For more information call (507) 564-1189 or visit facebook.com/pawprintbrew, pawprintbrewery.com, or check out their Instagram page.