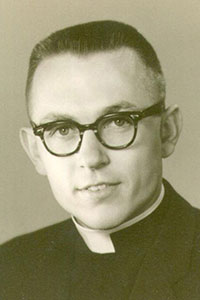 Funeral services will be held at Boldt Funeral Home, Faribault on Friday, November 13, 2020, at 1 p.m., with the Reverend Timothy McDermott officiating. Interment will be at Vang Lutheran Cemetery, Holden Township.

Visitation will be at the funeral home for one hour prior to the service on Friday.

Owen Maurice Gaasedelen, Jr., was born July 25, 1933 to Owen and Nora Gaasedelen in Faribault, Minn.  He was baptized by the Rev. Adolph Egge in Wangs Evangelical Lutheran Church near Dennison, Minn.  Early Christian training was given to him by his parents and the church.  When he was thirteen years old he was confirmed by the Rev. Chester Olson at Valley Grove Lutheran Church, Nerstrand, Minn.

He graduated from Faribault High School in 1951.  During his years in high School he was very active in many extracurricular activities.  His senior year he was elected president of the student body.

In the fall of 1951 he entered St. Olaf College.  He was somewhat undecided in what his life’s work was to be at the time. But, by the time he had reached his junior year he had definitely decided to enter the seminary after graduation.  He graduated from St. Olaf College in June 1955.

In the fall of 1955 he began his work at Luther Theological Seminary, St. Paul.  He married Kay Ford of Faribault on May 19, 1956.  They spent that summer at Remer, Minn., where he served as an assistant.  During the summer of 1957 he participated in the Pastoral Clinical Training Course and then served his year of internship at Lake Nokomis Lutheran Church, Minneapolis.  His experience in the Pastoral Clinical Training course and his internship further convinced him of the great need for the ministry of Jesus Christ.

In the fall of 1959 his first call was to Columbus, N. Dak. During this time he brought three perishes together under one building. His wife Kay called these years the Camelot years. In 1965 his next call was to Rushford, Minn. It was there that he helped build a new parish hall, remodeled the interior of the sanctuary and preserved the stained glass windows. It was during these years that he was trained in Bethel Bible Studies and he taught this series for his remaining ministry. In the fall of 1980 he moved back to Washburn, N. Dak., whereupon he called for new windows to be designed. In 1993 he moved to Garner, Iowa and it was there he would finish out his career in 2005. In all these parishes he was first and foremost a preacher of the people.

Owen is survived by his wife Kay, a son, Owen William and his children Owen James and Summer and their children Estes, Eden and Lars, Tiina Milja, and Markus William; a daughter, Mary Kay Gaasedelen Higgins and her children Elise Florence and Kate Ann; a daughter, Ann Gaasedelen and her daughter Jessica Renae; sister-in-law Virginia Gaasedelen Olson and a niece, Kristi (Bruce) Ponto.

He was a dedicated pastor, husband and father, grandfather and great-grandfather, a sinner saved by the grace of God in Jesus Christ, who preached the Gospel of God’s never-ending love.  One of his favorite bible verses was the Apostle Paul’s in Philippians 4:13, 14: “Forgetting what lies behind and straining forward to what lies ahead.  I press on toward the goal for the prize of the upward (Heavenly) call of God in Christ Jesus.”

Visit boldtfuenralhome.com for information and guestbook.