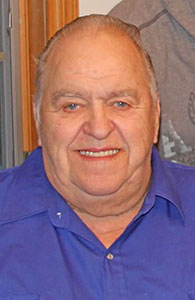 Owen was born to Olaf and Anna (Kieland) Hagen on May 13, 1931, and was a lifelong member of the Trinity Lutheran Church.  He worked on the family dairy farm and in 1950 he graduated from Spring Grove High School.  After school he joined the United States Army and was stationed in Germany for two years as an SP3, where he drove tanks and worked with heavy artillery.  After the service, he married the love of his life, Gayle Rodne, on June 28, 1957.  They lived on the family farm outside of Spring Grove to raise their family.

Owen loved anything related to farming and was proud to be part of one of the founding families of the Spring Grove Community and Trinity Lutheran Church where the family farm became a member of Minnesota’s Century Farms (166 years).  Throughout his life he was a member and supporter of 4-H (Newhouse Norsemen) and FFA.  His love of the outdoors continued with creating many memories with his family and friends trapping, hunting, and fishing.  In the winter, you would either find him ice fishing, having coffee with friends, or throwing strikes at the local bowling allies.  But his overall pride was his family and especially his grandchildren and great-grandchildren.

He is preceeded in death by his parents, Olaf and Anna Hagen; in-laws Harely and Phyllis Rodne; two sisters and brothers-in-law, Ione and Alden Benson and Ardys and Bob Hurley; brothers-in-law Larry Haugen and Jerry Norsby, and nephew David Benson.

Due to the COVID pandemic, a private family funeral services was held at Trinity Lutheran Church in Spring Grove lead by Pastor Lane Zaffke, with a full military burial service at the church cemetery on Tuesday, December 22.  Cards can be sent to: The Owen Hagen Family, 102 2nd St. NW, Spring Grove, Minn. 55974.