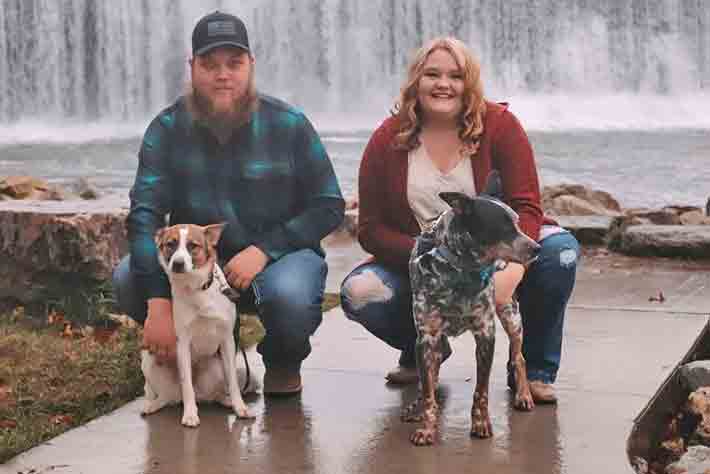 It’s been a month since an early morning fire at a two-story apartment complex at 815 Grand Street in Chatfield. Breaking out just after midnight on November 27, the fire displaced eight families and left the building in ruin. While the initial aftermath left the residents scrambling, they say the overwhelming support from the community of Chatfield was unforgettable.

Fifteen adults and one child were residents of the apartments: Joe Hintz, Molly Anne Rivera, Chris Anderson, Dody, and Jesus Perales, along with their seven-year-old daughter Raven, Lacey Manuel, Adam Thompson, Becky Irish, Connie Blaney, Tucker Peterson, Ray Manuel, Rave, and Rachelle Crocker, and two adults whose names were not known at the time of this publication.

“The outreach from everyone has been overwhelming. We didn’t expect this type of response,” says Rivera. “The whole town has been amazing. We appreciate everything everyone has done more than we can describe.”

Irish indicates the same through an intermediary acknowledging both the long road ahead and gratitude for what the community has done. “She is thankful and very grateful for the community she lives in and all that they have done. They were amazing,” says her friend Josie Bosma. “We all pulled together. It’s the great Chosen Valley!”

“We are beyond thankful to the community for helping as much as they did,” adds Blaney.

Owners Mike and Julia Sogla and Mark and Nicole Welch had only owned the property for a year, purchasing it on December 28, 2021. The company, which owns 17 properties in Fillmore County, had yet to experience a loss of this magnitude. They’re learning to navigate forward with the Red Cross, state investigators, and insurance providers.

Mike Sogla acted as the primary contact between residents and the first department. “We got a lot of calls about what the process was going to be,” says Rivera.

While the cause of the fire is under investigation and the state fire inspector’s report is pending, the owners anticipate the building will be a total loss. The market cost to rebuild and the financial value of all losses is also unknown.

“In the days after the fire, our main focus was trying to help our residents with any assistance we could provide at the time. We were able to assist most of our tenants one at a time, with the fire marshal’s permission, to return to their homes and try to recover any salvageable personal items.”

“We woke up to the upstairs neighbor hitting the ground outside our bedroom window, and then they started yelling, ‘fire.’ Joe looked out the window and realized that the front of the building was on fire,” recalls Molly Rivera about her upstairs neighbors, Lacey Manuel and Adam Thompson, leaping from their second-story window and alerting residents. Rivera describes the fear and panic in the initial moment and the sadness that came after. “People lost so much. We’re thankful for what we were able to salvage and that it wasn’t worse.”

The next few days played out in a blur for all the residents as they found temporary housing and looked for permanent housing, all while many needed to take time off work. A family member ultimately put Rivera and her family in a hotel for the week, and they were able to move into a different apartment within a week after the fire. Irish is staying with her son until she can get things figured out. Blaney and Peterson have found housing for themselves and their pets.

“Sleeping has been difficult… and trying not to worry that it will happen again,” admits Rivera. “We’re still in the process of replacing things and trying to get back on track financially.”

The day after the fire, replacements for things began pouring in. Resident Brandy Ballen organized an evolving list of needs for the families. Chatfield Schools got in touch with her regarding the needs for Raven Perales, and Chatfield Lutheran began serving as the designated collection point for immediate and long-term donations.

With Christmas just around the corner, donations for Raven Perales were incredibly touching, including several new Christmas presents. Families came to the church on November 30 to “shop” for items. “I’m sure there was more!” Ballen continues. “I still have people reaching out to donate. Our little community is truly tremendous.”

Likewise, Julie Sogla talked with Ballen and the local churches after learning they needed a non-profit to step up to help with financial donations. Sogla approached the Chatfield Alliance, which set up a monetary assistance fund at F&M Bank on November 29. The alliance helped facilitate and keep track of the donations and got the word out to the community about needs by utilizing social media and community email distribution lists mainly made up of businesses and organizations. The fund was officially closed on December 9 to distribute the funds to the families before the holidays.

Jac’s Bar & Grill also began working on a comprehensive list, particularly for employees Becky Irish and Rave Crocker. “We set out donation buckets for them. We’re waiting until things settle out a bit to see what their other needs are. It’s been great to see everyone helping,” said co-owner Jamie Arthur.

In addition, family and friends of the families set up Go Fund Me or Angelink online fundraising pages, shared digital wallet platform requests such as Venmo, and provided online wish lists of needs.

“It is truly heartwarming to see a community come together in a time of need,” says Nicole Welch. “To all that helped out in so many ways… know that your time, prayers, and donations did not go unnoticed. The outpouring of support will always be remembered.”