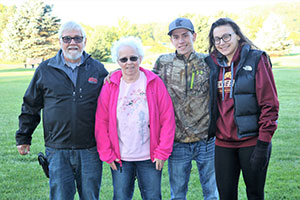 “If you know someone who is showing signs of anxiety or depression, reach out to them, show them that you’re a friend and that you are there for them and they can pull through this,” states Terry “Hogie” Haagenson, organizer of the Out of the Darkness Walk through the American Foundation for Suicide Prevention (AFSP) held in Chatfield’s Groen Park on Saturday, September 19, 2020.

Haagenson took it upon himself to organize the walk in Chatfield after original plans changed.  “They normally have one every year in Rochester, and that covers the Rochester area, and it’s hundreds of people that show up for that,” he states.

“But with COVID-19 this year they decided not to have the walk, but everybody do their own, at their own pace, individually, and they would be a virtual walk in many cases,” explains Haagenson.

“So, I thought, let’s have one in Chatfield,” says Haagenson, which was planned to be an informal event where people could get together for an important cause but still be able to remain socially distant.

Suicide Prevention is personal for Haagenson and his family, even more so after losing his grandson, Zebulin “Zeb” Hermanson, to suicide in 2018.

When asked to describe Zeb, Haagenson quickly responded “kind, considerate, fun-loving, friendly, helpful, courteous, energetic, silly, and family-oriented,” as only the beginning of how he would describe Zeb.

Zeb was a well-known and much-loved bartender at The Loop in Rochester, Minn., and those who knew him will forever remember him for his friendly and caring personality.

Shortly before his death Zeb earned his real estate license and had just listed his first home for sale, so the news of his passing was a great shock, even to those who loved him and knew him the most.

After the tragic loss of Zeb, his family and friends became involved in suicide prevention in various ways, including the creation of an annual memorial golf tournament, named Zeb’s Memorial Classic, and also got involved with the AFSP to not only honor Zeb, but also to heighten awareness and raise funds in an effort to save others.

Teams are established for the Out of the Darkness Walks, and each team walks in memory of somebody lost to suicide.  Every team raises money by requesting and receiving donations and the proceeds from the walks are then donated to the AFSP.

“Suicide most often occurs when stressors and health issues converge to create an experience of hopelessness and despair.  Depression is the most common condition associated with suicide, and it is often undiagnosed or untreated,” according to the AFSP in their publication of “Talk Saves Lives.”

“Most people who actively manage their mental health conditions go on to engage in life.  Condition like depression, anxiety and substance use problems, especially when unaddressed, increase risk for suicide,” states the publication.

Some people are more at risk for suicide than others depending on several factors including health factors, environmental factors and historical factors.

There are typically warning signs if someone is considering suicide by what they say or do, such as talking about suicide, feelings of hopelessness, etc., and also a change in their behavior or mood.

For anyone who may be contemplating suicide Haagenson says, “talk to family, talk to friends, talk to someone you trust.  Don’t give up, there are plenty of people that are willing to help,” and get you through the difficult times.

Some sobering statistics courtesy of the American Foundation for Suicide Prevention from the organizations website, afsp.org:

•The rate of suicide is highest in middle-aged white men.

•On average, there are 132 suicides per day.

If you are struggling with suicidal thoughts, please call the National Suicide Prevention Lifeline at 1 (800) 273-8255, text TALK to 741741 (free of charge, available 24 hours a day, seven days a week, and confidential), talk to someone you trust or contact a mental health provider.

Photo: Terry “Hogie” Haagenson, organizer of the Out of the Darkness Walk 2020 in Chatfield, Minn, his wife Kathy, their grandson Sawyer Haagenson and Sawyer’s girlfriend Avianna Ruskell met participants with a smile at Groen Park on Saturday, September 19.
Photo by Barb Jeffers