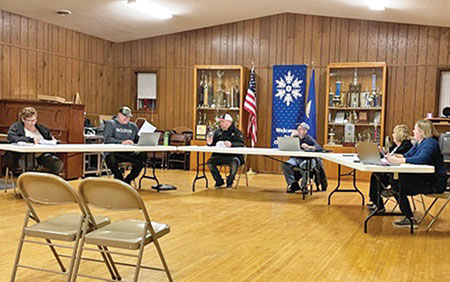 During the open meeting, Brincks brought up some information from Minnesota State Representative (District 23B) Jeremy Monson.  Brincks stated, “So I put this in your packet, it’s called ‘Become a Freedom County.’  Jeremy Munson’s your state representative… He is encouraging counties to consider this as an option.  I encourage you guys to read it and look over it.  You would make a resolution as laid out.  You would take it to your commissioners, and you would ask them to vote on it.”

The materials shared with the council, from Munson’s website, stated in part, “Download model language to stop Governor Walz’s powers in your county.  Sign the petition below so we can deliver signatures to each county.  Meet with each of your county commissioners, police chiefs, and county sheriff.  Develop a plan to gain majority support among county commissioners.”  The materials went on to state that Minnesota statute 12.31 allows the governor to declare a peacetime emergency, but Munson feels the current pandemic does not meet the requirements in the statute because, “Not only does COVID not endanger life AND property, but many local governments, cities, and counties now have ‘adequate resources to handle the situation.’”

Munson’s website includes a template of a suggested resolution for cities to use to encourage their local county to become a Freedom County.  Brincks stated that if a county does this, the county could then be exempt from the governor’s declarations about the pandemic.  She added, “You would control your bars and their statuses based on what your need is.”  The council did not take formal action at this time.

The council discussed operations at the Wastewater Treatment Plant (WWTP).  It was pointed out that the pump is operating well, but an electrical problem is causing some fuses to blow.  Parts have been ordered to fix the problem.

Dan Hellerud asked, “I looked at the total monthly wastewater pumping gallons.  Why is this so much less than last year?  From the last halfway through the year on, it’s quite a bit less this year than last year.”  Jeremy Runkle said the difference could be partially explained by rainwater infiltration or other factors, but he doesn’t have a clear answer.  Regarding previously discussed repair costs at the WWTP (roughly $22,500), Brincks said the city found out that the insurance carrier agreed to pay for the needed repairs.

Brincks informed the council that the city’s first responders had applied for and received a grant through the Osterud Foundation.  She stated, “They were awarded over $700 and so they got a glucose monitor, they got some safety vests, and they also got a mailbox that they had requested on that grant.”

The council made annual designations as follows: city attorney (Craig Byram), prosecuting attorney (Lee Novotny), city newspaper (Fillmore County Journal), and deputy mayor (Stephanie Start).  Brincks shared that the Zoning Board is set to meet on January 12 to discuss the Storage Container Ordinance, but she said that meeting may be rescheduled due to a scheduling conflict for the attorney.

The council’s next regular meeting will be Tuesday, February 2, at 6:30 p.m., in the community center.   he public is welcome at all meetings, other than special closed meetings.