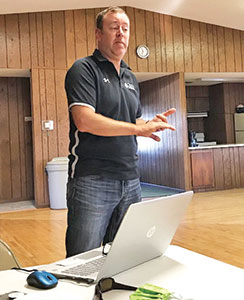 The Ostrander City Council met on July 7, with all members present (Stephanie Start, Dan Hellerud, DJ Start, Vernon Thompson, Mayor Pam Kunert, and City Clerk Wendy Brincks).   Brincks introduced Chris Hahn, from the Fillmore County EDA, and explained, “We have Coronavirus Relief Funds that the city is able to receive.  It’s $18,835.  It can only be used for coronavirus relief expenses.”  Hahn then went into more detail about the available funds, explaining that nearly every city in Fillmore County has opted in for the funds.  He said the funds must be used before the end of the calendar year, and can be used to help with expenses incurred by businesses, families and individuals.  He added that “It goes back if you don’t use it.”  Hahn said he will send the city a list of FAQs to answer most questions that the city or citizens may have, and in summary, he stated, “I would recommend opting in.”  The council voted to opt in for the funds.

Brian Malm, of the engineering firm Bolton & Menk, addressed the council with information on the bids received for two portions of Ostrander’s ongoing infrastructure improvement project.  The first portion, designated as “Phase 2 Infrastructure Improvements,” netted six bids ranging from $2,093,895 to $3,123,985.

There were four bids received on the “Water Tower and ADA Improvements” project, ranging from $938,000 to $1,588,672.  In summarizing the bids received on each, Malm stated, “So the short answer to this is, we got competitive bids, we received good bids.  They’re under the eligible funding amount.”  He added that Bolton & Menk is recommending that Ostrander accept the low bid on each project (Alcon Excavating for Phase 2, and General Construction Services for the water tower).  He added that both contracts would be contingent upon approval from Rural Development.  The council voted to award the bids to the contractors as recommended.  Malm added, “The only piece of the project that is left to bid is the water meter contract… that will come later.”

Stephanie Start asked if any of the applicable streets would be paved before this winter, as the project moves along.  Malm said that although that was originally a part of the plan, it is no longer expected, due to the challenges in contractors having to pave a street late in the year, particularly late October or even November.  So, he explained, any streets that were essentially “done” would likely be left as a gravel surface over the winter, and then paved in the spring.

The council discussed a door-to-door salesman that has recently been soliciting Ostrander residents, selling Dish and DirecTV services.  Brincks said the business appears to be legitimate, and asked to the council to consider a request for a Condition Use Permit (CUP) to allow the door to door sales to continue.  Council members voiced concerns that some citizens might feel pressured by such an approach, and the council denied the request.

Brincks noted that this fall, the council will have three seats up for election, including a two-year term for mayor, and two four-year seats on the council.  The applicable seats are currently held by Mayor Pam Kunert, and councilors Vernon Thompson and Dan Hellerud.  The filing dates for anyone wishing to run for election to these seats will be July 28 to August 11.  Regarding upcoming elections, the council voted to have the August election via mail ballots only, while the November election will include a traditional polling place for in-person voting.

The council approved purchase of an exhaust fan to be installed at the fire department.  Brincks reported that the sheriff’s department will be working to enforce ordinances related to the operation of UTVs, ATVs and golf carts within the city.

Brincks reported that Ostrander’s citywide clean-up day was a big success, netting more trash than ever before.  She also shared preliminary information for the city’s next budget.

The next regular meeting of the city council will be the second Tuesday, August 11 at 6:30 p.m., in the community center.  The public is welcome at all meetings, other than special closed meetings.