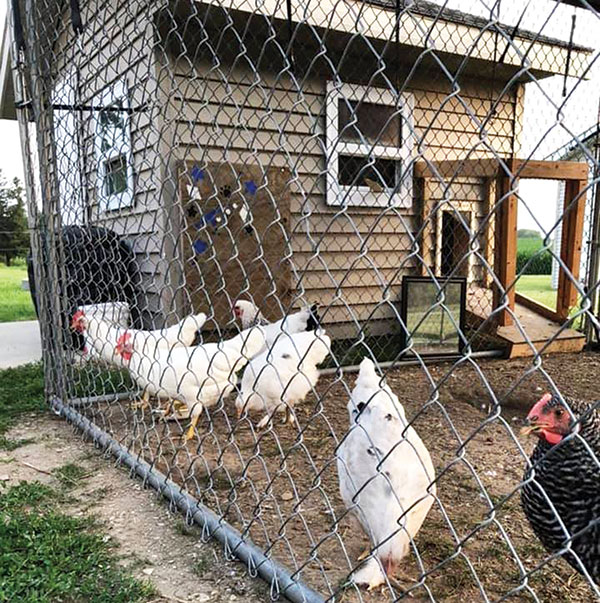 During the Ostrander City Council meeting on June 7, with eight visitors in attendance, the council held a “secret ballot” vote on whether or not to adopt a proposed draft ordinance to allow residents to keep chickens, with certain limits and stipulations.  Each council member used pen and paper to record their vote, and the papers were then given to City Clerk Wendy Brincks, who counted votes after all were received.  She reported, “At this time, the City of Ostrander council is going to deny the chicken ordinance.” She stated that the vote was five against, and zero in favor of the ordnance draft.

City Maintenance Head Jeremy Runkle gave an update on his department, including plans to install playground equipment at the city park.  Runkle also stated, “Street signs, about half of them need to be replaced.”  He said the state standard is for six-inch lettering, whereas Ostrander’s street signs have four-inch lettering.  He added, “My suggestion is to replace them all at one time.”  No council action was taken at this time.

There was discussion about options for upgrading Ostrander’s tornado sirens, so that the siren could be heard further away.  Brincks shared that a “sound study” was recently done by Federal Signal, to help determine which type of siren, and what siren locations, would best meet Ostrander’s needs.  A price quotation for the suggested equipment totals $26,325.  Brincks said a grant is available to pay 35% of the cost.  Brincks said some information is still being gathered regarding funding, so she suggested the council wait until July to act on this issue.

City Clerk Wendy Brincks informed the council of four homeowners she has sent letters to regarding “Yard cleanup notices.”  Brincks and the council discussed the properties and their progress (or lack thereof) in working to come into compliance.  Brincks added that one homeowner has been observed to be burning household garbage on a regular basis, which is in violation of city ordinance.  Mayor Pam Kunert stated, “My suggestion is that we move forward on it.  If we dawdle, they dawdle.”  The council voted to continue enforcement per the city ordinances, including a fine for burning garbage.  Brincks said homeowners get 14 days from the date of notification to come into compliance.

Mayor Kunert brought up a recent evening when gunshots were heard in town.  Others stated it may have been fireworks, or someone blowing up a beaver dam.  Kunert said what she heard clearly sounded like gunshots.  The council agreed that any such concerns could/should be promptly reported to the county sheriff’s department.  Kunert also said she’s heard of an increase in violations of the noise ordinance, with citizens mowing or running loud engines at night.  Brincks said deputies have been asked to monitor this issue.

Dan Hellerud voiced a concern about dogs running loose.  He said he witnessed two dogs chasing after motorcycles on a recent night.  Brincks said enforcement is continuing per ordinance, and that reminders are frequently given.

Brincks pointed out that citywide cleanup will be June 25,  from 8-11 a.m.  She read a list of items that will be accepted, and asked that citizens call her if there are questions.  The council considered a request from Wolf’s Den, to hold a dance on June 11, and also on July 9.  The council approved the request as      submitted.

The council’s next regular meeting will be Tuesday, July 5, at 6:30 p.m. in the community center.  The public is welcome at all meetings, other than special closed meetings.  A Zoning Board meeting will be held Tuesday, June 14 at 7 p.m.