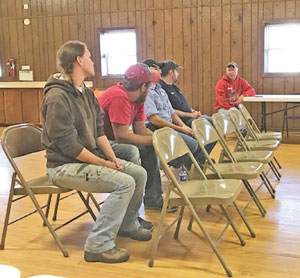 During the public hearing, no citizens addressed the council to voice concerns or ask questions.  Brincks explained that the council should consider whether or not to adopt a resolution entitled “Resolution to Apply to Participate in the National Flood Insurance Program.  She explained that, “That guarantees the homeowner the ability to insure their home if they build in a floodplain.  That floodplain on the map is over behind CHS, not in a place that someone would most likely build a home, but there’s a potential at some point… they would have to jump through all the hoops that FEMA has set forth.”  The council voted in favor of the resolution as presented.  Brincks then stated that the council could also consider the proposed Flood Plain Ordinance, which was explained by Brian Malm (of Bolton & Menk Inc.) at the council’s August meeting.  The council voted to adopt the ordinance as proposed.

The council and citizens in attendance discussed the ongoing issue of rusty and/or foul-smelling water in some areas of town.  Jeff Tart (City Maintenance) explained the watermain flushing that has been happening recently, and the usual pattern of which hydrants are opened, and in which order.  When asked how long each hydrant has been open, Tart replied, “At least 20 minutes per hydrant.”  Brincks asked if flushing was only done in the worst areas, and Tart answered, “We open them all.”  He also explained that the pattern allows the highest pressure to be used on the most problematic areas of Ostrander’s watermain.  Citizens in attendance said the flushing has provided them with only temporary relief (an hour or two) from the water problems they are having.

Dan Hellerud suggested that a different pattern of flushing should be tried.  This request will be shared with Peopleservices.  The council asked citizens to please give feedback on the effectiveness of watermain flushing, so the city can hopefully get the problem dealt with before winter, when frequent watermain flushing becomes unrealistic.

The council discussed advertising for bids on the city’s snow removal for the 2019-2020 season.  The proposed wording stated that the bid will cover snow removal around fire hydrants, the lift station, and downtown Ostrander.  The wording also stated that the snow removal should be done “after six inches of snow fall,” but Hellerud suggested deleting that portion and simply asking bidders to give an hourly rate for snow removal.  Bids will be accepted until September 30 at 2 p.m.  The council voted to approve the advertisement for bids, with the change as suggested by Hellerud.  Regarding snow removal, Brincks also stated, “The ordinance states you (citizens) are responsible for your own sidewalks.”

The council also voted to post the upcoming position vacancy of part-time general maintenance.  Applicants have until September 19 at 2 p.m. to apply.  The council will schedule a special meeting to conduct interviews, as needed.

The next regular meeting of the city council will be October 1 at 6:30 p.m.  The November meeting will be changed from November 5 to November 12, due to an election being held on November 5.