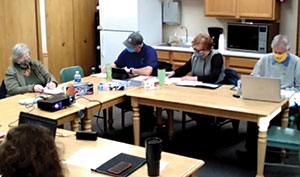 Meeting dates were set for the third Thursday of each month at 4:30 p.m. with the option to hold an early morning meeting after publicizing it a month in advance. Depositories were left at the same financial institutions as used last year. Per diem pay was set at $75 and mileage at the current IRS rate of 56 cents per mile. Dues to MASWCD (Minnesota Association of Soil and Water Conservation Districts) in the amount of $3,643.77 were paid.

The 2021 budget was passed with a 2% COLA increase. A line item that raised discussion was the budgeted $40,000 tree expense. The board learned that the budget includes trees, shrubs, tree tubes, bags, etc., with the staff time going through payroll. Laura Christensen, district administrator commented, “Historically, we have come out on the plus side of that,” as she reminded them the budget was fluid and would “firm up” early in the year. Christensen reported that tree orders have been coming in already.

The board heard a technology update; a bid from Computer Danamics of Chatfield of $4,677 for installation of two cameras, microphones, a TV, and a refurbished computer with a network link back to the main building in the conference room.

A 2021 plat book will be produced this summer by Rockford and sold at the current rate. In the meantime, six more of the 2019 plat book will be ordered since they are currently sold out. The board intends to hold a contest for submissions of Fillmore County pictures for the cover of the new book. The pictures will be screened for invasive species before being selected.

In the planning portion of their meeting,  the board went through an extensive list of goals of the SWCD for the past year, heard what was accomplished, and made modifications to the goals for the coming year as necessary.

In an education goal, the board removed a canoe trip, noting that lately the trips had had to be cancelled because of bad weather; the Friends of the Root River will continue to offer such a trip.

A goal of controlling soil erosion for which the action is to assist farmers in implementing cover crops led to discussion by the board. Dean Thomas of SWCD staff reported that only about 50% of farmers who participate in the program continue planting the cover crops after the three-year paid program is over. Dwayne Ostrem opined that three years wasn’t long enough to see the results. He felt education was needed, adding the hardest part was getting it established.

Goals for water resources saw the assistance in one feedlot runoff control system installed, five rain barrels sold, inspection of the Harmony rain garden completed, and assistance with Fillmore County hazardous waste. Reduction of groundwater contamination due to karst topography was accomplished by sealing four wells and assisting MDA and the DNR in monitoring nitrates in Odessa Spring.

A goal to educate the public about SWCD brought actions of redesigning the website, creating Facebook pages, and making new maps for Lost Creek Hiking Trail. Because of COVID, several of the educational events were not held this past year.

In a final discussion, the board decided to eliminate partnering with the Land Stewardship Program. The group has been known to not be friendly to farmers; as a result, the board was concerned they were getting fallout with the ag community not coming to events because of the involvement of Land Stewardship. Dwayne Ostrem commented, “This is an opportunity for us. We have to guard our reputation by who we partner with.” The board intends to spearhead some of the same activities in Fillmore County next year on their own.

After the careful scrutinization of their goals, the board adjourned the first meeting of the year with a clear understanding and agreement of their goals.

The next meeting of the Fillmore County SWCD will be February 18, at 4:30 p.m. in Preston.