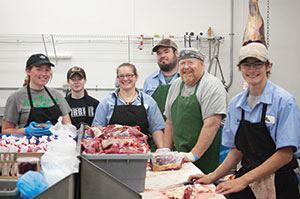 Envision spending two years preparing to open a financially laden business from the ground up nine days after the start of COVID-19, a global pandemic. That is what the owners of the Stinson’s Country Style Meats were faced with when they opened their business in the farming community of Houston, Minn., on March 20 of this year.

Upon walking into the breakroom to interview the owner for this article, the aroma of meat cooking in the slow cooker immediately broke the train of thought. The first thought that arose was that there is more to this story than a new business thriving to exist during the largest recession since the Depression. Owner David Erdmann explained that a home cooked dinner for all the employees is a common occurrence.

As the interview began, Erdmann’s daughter Michelle Stinson, followed by her husband Jamie Stinson, and then his wife Kathi Erdmann, joined the conversation. Hearing the confusion in my voice, Erdmann explained that when he and his wife retire, they did not want to rename the business, so the family elected to go with his daughter and son-in-law’s last name.

Knowing the story behind the name of the business lead me to wonder what everyone’s background and roles are in the business. With laughs from everyone in the room, Erdmann explained that he was a mechanic. In addition to being an investor, Erdmann is responsible for keeping everything running and making all the sausage. Mrs. Erdmann explained that she and her husband first milked cows for 16-18 years. She has now been an educational assistant (EA) in the Winona school district for the past 16 years. Her role in the family business is similar to her EA job because they put her wherever.  The Stinsons have a combined total of 32 years working in local meat processing facilities.

A question racing through my mind since I arrived begged to be asked. How is the business doing during this challenging time? All four owners yelled in unison, “busy.”

In addition to beef and hogs, the family processes sheep and goats as well as deer. Currently, they process 8-10 beef a week, plus every other week they also process 15-18 pigs to keep up with the need for ham, bacon, and sausages.  Like other meat processors in the area, Stinsons are booked to 2021.

As the interview continued, the conversation took an unexpected turn.  It is important to the couples that they exhibit empathy and respect for the farmers and 4-Hers who raised these animals.

Michelle Stinson mentioned that they adhere to state code. She went on to explain that “everything is as humane as possible. There is no roughhousing. If they do not adhere to state codes, they will get in trouble.” She stressed, “It is important to respect the farmers as these animals are their livelihood.  It is how they make their money. The farmers appreciate that.”

It is difficult when the 4-Hers bring in their fair animals. Not only are there tears in the eyes of the 4-Hers, but the employees have wet eyes as well. The employees are aware that these animals are pets as the 4-Hers have spent many hours with their animals throughout the year, getting them ready to show at the county fair. Stinson explained that they give the 4-Hers all the time they need to say goodbye to their animals.

Educating their customers and the community is an important strategy of the company’s business plan. For example, reproductive organs are donated to area schools so students can learn about the inner workings of the animals. 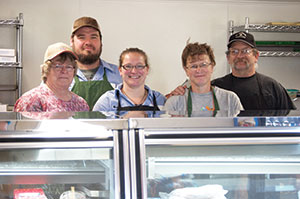 A noticeable change in consumer buying habits is a result of the big packing plants shutting down due to COVID-19. The Erdmanns and Stinsons are noticing that people are buying locally and from farmers. Michelle Stinson explained they could easily double or triple their numbers and still not be able to keep up with the demand.

Now for the tasty part of the operations. Retail customers are greeted by another family member, David Erdmann’s sister. The display case offers something for everyone.  “Hotdogs and ring bologna are the number one sellers and difficult to keep in stock,” shared Stinson.

“We’ve had our venison processed here the past two years, awesome summer sausage and wieners! We’ve visited their retail counter several times since they’ve been open — ribeyes, breakfast sausage, snack sticks, bacon, deli meat. Everything is AWESOME! So happy to have them in town!” recommends Allison Boldt on the company’s Facebook page.

Based on customer recommendations posted on the company’s Facebook page like the one above, Stinson’s Country Style Meats is a destination that belongs on a bucket list.