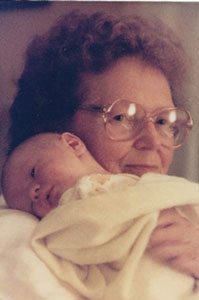 Olive Gertrude Mindrum Bailey died in Manchester, N.H., July 9, 2020, at the age of 99. She was born in Norway Township, Minnesota, on November 14, 1920, daughter of Otto and Olga (Overland) Mindrum. She graduated from Rushford High School in 1938. On July 16, 1940, she married Merlin Johnson in Norway Township. That marriage ended in divorce. On February 22, 1952, she married Edward Lee Bailey and they raised a daughter, Jeanine, and a son, Edward, Jr. in West Liberty, Iowa City and Cedar Falls, Iowa. Edward, Sr. died in 1974. Olive moved to Amherst, Mass., in 1980 and Manchester, N. H. in 1997, to be nearer to her children. She lived the last years of her life at the Maple Leaf Health Care Center in Manchester. Olive was kind, caring, funny and gifted in so many ways.  She shared her love of music, playing the piano for family sing-alongs and singing with her children and grandchildren. Family members relied on her remarkable memory to connect with ancestors and family history that came alive as she recounted. Olive delighted in learning about the lives of her family, friends and caregivers.  She always made it clear to people that she was interested in them and cared about who they were.  She treasured the stories they shared with her. She remained optimistic, positive and caring even as aging created a more limited life. Olive embraced life with humor, curiosity, wisdom and enthusiasm.  She left behind a circle of family, friends and caregivers who feel richer and blessed for having known and loved her.

The family would like to thank the staff at Maple Leaf Health Care Center for the kind and loving care that they gave to Olive. Burial took place in Fairview Cemetery in Cedar Falls, Iowa, on July 23. There will be no public service. Contributions in Olive’s memory can be made to the Macular Degeneration Association, donatenow.networkforgood.org/macularhope.