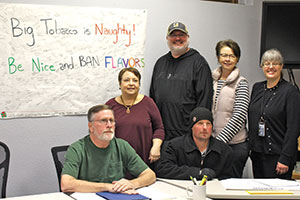 Leading the pack of communities looking to update long-standing tobacco ordinances amid the wave of electronic nicotine delivery services (ENDS) and increases in youth tobacco usage, Rushford Council passed modifications to its ordinance unanimously at a special meeting December 16. The council has been discussing the matter with Fillmore County Public Health for over a year and made the decision December 16. The previous ordinance on the books dated back to 1997.

The city held a public hearing on the matter November 12 to a standing room only crowd. At the meeting, changes to policy language were recommended including removing portions of the draft done by the Public Health Law Center related to menthol/mint flavorings and seller’s age. The complete ban on all ENDS was also stricken from the ordinance, following counsel from the League of Minnesota Cities. According to the league, banning a legal item could create opportunities for lawsuits.

The biggest impact of the new ordinance though is no possession, purchase or usage of tobacco products by anyone under the age of 21 within city limits (T21). This revision is one urged strongly by proponents, including Rushford-Peterson School District Principal Jake Timm, who concerns to the city was the catalyst for the ordinance review.

“The state is looking at T21,” said Kelly McIntee, representative from the American Lung Association. “State and national movement indicates this is something the state would be moving towards.” McIntee also noted the state will be looking at vaping policies down the road calling the trend an “epidemic.”

Brenda Pohlman, Fillmore County Public Health Educator, added details of momentum regarding the Safe Kids Act and the Association for Minnesota Counties. According to Pohlman, T21, flavoring (including menthol) and reappropriation of prevention funding are all being discussed.

“They can drive to Winona or another establishment, but they can’t have it once they come back here,” said Councilor Jim O’Donnell. “You can’t control everything, but you can help what happens here.”

While Public Health had initially pushed for banning flavorings of any kind in any tobacco product, businesses pushed back noting menthol and mint flavorings prohibition would wipe out 40% of the cigarette sales and most of the chewing tobacco sales. The “broad strokes” originally aimed at reducing the appeal to youth were narrowed to include flavors except mint, menthol, peppermint, and spearmint.

Following discussion with business owners at the public hearing, the ordinance’s age of seller was reduced from 18 to 16. Businesses expressed concern over the ability to hire, properly train, and also retain workers should the higher age limit be imposed. Having taken business concerns into consideration, Mayor-elect Terri Benson asked how they see the revisions impacting businesses.

“Our store is adjusting, but on a much bigger spectrum, it’s dwindling down,” said Jordan Brand, representing Pam’s Convenience Corner. Brand noted the store purchased 500 cartons a week in 2005 and that amount is now down to just 80-90 a week normally. “It’s a dwindling market. Based on what I’m seeing, use in general is down. $10 a pack is expensive. It’s an expensive habit.”

“The county, as a whole, has declined. Youth rates were down, but three years ago began going up, due to vaping,” added Pohlman. Additionally, she noted rural areas typically have more chewing tobacco usage.

“We originally were going to ban e-devices, but it’s easier to go after flavors than banning e-devices because of the legalities. Sell at 16 and buy at 21; ban flavors. I think we’re good,” said O’Donnell.

The new ordinance will go into effect January 1, 2020. Implementation for the retailers will be gradual to allow vendors time to liquidate their inventory. They will have until April 1 to comply with the new ordinance.

Fillmore County has been presented with an overview of policy options and model policy. They have asked for a draft from the law center, according to Pohlman. There is no definite time frame for pending changes.

The city has encouraged R-P Schools and their students to take their effective campaign to the county and state level. “That’s how a movement happens. I appreciate you working with them and Jordan to find the right mix for the community,” said Benson.

“Federally, I don’t think there will be anything for a while; the state perhaps. That’s why I want these kids to have their voices heard outside our community. It’s impactful when you see students talking, teachers talking, parents talking, nurses talking… it makes a difference,” stated Benson.