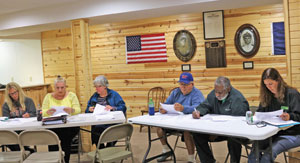 As the Whalan City Council met on September 9, the council was pleased to announce that the new steel roof on the Whalan City Hall has been installed and all work on the roof has been completed.

Following the pledge of allegiance, the council got to work on the agenda items.

Minutes from the August 12, 2019, regularly scheduled city council meeting were read aloud by Melander and approved.

Also approved were the treasurer’s report and bills due as listed, as well as the bills turned in at the meeting.

There were no comments from any council meeting visitors.

Tuftin gave an update on AcenTek retiring an electric pole. The power to the workstation hub needs to be cut.  Once the power to the pole has been terminated a final bill will be sent to AcenTek.

Council members were given a copy of the 2020 budget for review.  A 10% tax levy had been suggested.  The final tax levy will come out in December 2019, and the council will make final decisions on the budget at the regularly scheduled December council meeting. The proposed tax levy of 10% was approved.

Tuftin suggested that the council schedule a budget workshop where the council talks only about the budget.  “That way we can have all our questions answered, it’s open to the public should anyone want to come,” stated Tuftin.  She asked the council members to make a list of things that they have seen around the community that they think need to be addressed in 2020.

“Obviously, some of the things will have to wait but we have to be able to discuss it and prioritize it and we don’t really have enough time to do that in our regularly scheduled meetings,” added Tuftin.

“That way you can really get a feel by looking at this, where are our major expenses, how should we budget for it, what kinds of things would you like to plan for in the next year and in the next five years,” Tuftin said.

Tuftin reported on the issue of trees on city property.  There are three trees on a city boulevard and and an additional tree in city limits the council feels may need to be removed.  The trees are to be assessed by Dave Norby of Norby Tree Service.  These trees will be removed if necessary, as well as any others Norby feels should be taken down.

Cook reported on the new town hall steel roof.  There was no damage found under the shingles when the old roof was removed. The council is very happy with the new roof and how quickly Byler Construction of Lanesboro got the work done.

Tuftin reported on the city work list. The lights at the gazebo have been fixed.  There is a cap missing from a fire hydrant.  The city has a cap which Randy Berekvam will put on.

Tuftin reported on electric performance, and requested a group be formed specifically to monitor the electric performance and how the city is doing.  This includes any delinquent payments and what the city is doing about it.  The group was created and includes Tuftin, Cook, Berekvam and Melander.  They will meet quarterly, beginning January 4, 2020.

Tuftin also recommended that the city have Star Energy do an assessment of the city’s electric performance to offer more information on what is appropriate and what the rates should be  based on several factors.

There will be a city review by a Fillmore County Deputy with Melander riding along.  Notices will be sent out to property owners whose property is assessed as needing to be cleaned up.

The next regularly scheduled Whalan City Council meeting will be held on October 14 at 7 p.m. in the city hall.  The public is encouraged to attend.