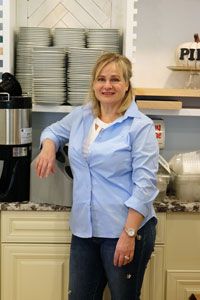 Although the Aroma Pie Shoppe was closed during the off-season, it was a very busy place as owners Karna and Pat Hudoba and their family made some big changes.

Coming in to their fourth season as owners of Aroma Pie Shoppe, Karna was ready to make the changes she had been hoping to implement since they originally opened the business.

“I had a vision of one day having my own place… I didn’t envision it the way it was before,” she explains.  “I’ve been looking forward to it, just to make it a little more friendly to come in to – something fresh,” Karna explains.

For return customers, the first thing they will notice when they walk through the door is how bright and open the pie shoppe is inside.  Then your mind will take a second to adjust to the fact that what once was the service area is now the seating area and vice versa.

The front area used to have a long bar with a bar-back as the service counter.  The bar and bar-back are now gone and there are tables and chairs in the room, which now seems so much larger than it used to be.

A church pew, strategically placed inside the front door, guides customers inside towards the service area.  Large windows installed in the front room provide cheerful lighting and stools will be placed by the windows for additional seating.

“The new windows are just so nice,” notes Karna, as they spread cheerful sunshine through the building and provide nice views of the outdoors, including the bike trail.

Ceiling fans have been installed to create air movement for comfort and a speaker system was installed so customers can enjoy background music.

The carpeting was removed, the floor leveled and new flooring was installed, which adds a great deal to the new look of the Aroma Pie Shoppe.

“People come here from all over the world – it’s incredible,” states Karna.  “To have people come in here and they can sit in one room together” she states, is what she always envisioned.

Aside from the indoor seating there is also additional seating on the porch and outside which provides comfortable seating for a large number of customers.

The doorway and wall between the front and back areas were taken out, making a wide open work space and transitional area from the seating space to the service and prep area.

The new service counter area has a new ice cream freezer and an additional pie display case, among other improvements.

Another big change is that the owners have added a walk-up window where customers can be served if they choose to stay outdoors instead of coming inside and sitting down.

A wide door was moved from the rear of the building so that it enters into the seating area, making it more handicapped accessible and seating will be more accessible as well.

In the food preparation area a custom pie cutting station will be installed and all pies will be more easily accessible for employees.  An area has been created for sandwich and salad preparation, which combined with other enhancements will be appreciated by employees and customers alike in order to get the delicious fresh food out as soon as possible.

Everything at the Aroma Pie Shoppe is made in-house, from scratch, on a daily basis.  Along with their delectable offerings of pies, sandwiches, soups (in autumn), salads, ice cream, malts, tea, coffee and more, there are a few surprises on the menu this year.

The Aroma Pie Shoppe will now be offering quiche to the sure delight of customers who would love to have a piece of quiche with their morning coffee.  Karna will also be selling pasties, which are hand-held pies in many different varieties, for an easy on-the-go treat.  Another new item added this year is pie shakes – imagine a shake with a slice of your favorite pie added!

The Aroma Pie Shoppe will open on Saturday, May 11.  They plan to be open every day of the week this season, opening at 10 a.m. each day for local residents and tourists alike.

From Sunday to Thursday, if business is slow, they may close at 4 p.m. but otherwise will be open until 5 every day of the week.  Customers can always call ahead to make sure of closing time.

“I am so looking forward to this season,” states Karna.  She also gives a hint that once the website for the Aroma Pie Shoppe is up and running, there will be an opportunity to sign up for pie making classes she will be offering in the off-season. “People like having that type of experience,” she says.

The Aroma Pie Shoppe is located at 618 Main Street in Whalan, Minn.  The phone number is (507) 467-2623.  More information can be found on the business facebook page at facebook.com/aromapieshoppe.