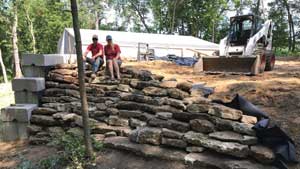 For newlyweds Jason and Alyssa Aylsworth, of Fountain, their dream home is nearing a reality and despite its old-world background, it’s anything other than conventional. The couple is just weeks away from embarking on the raising of their timber frame home.

“We enjoy being a bit different/unique so we knew we didn’t want just any old house that you see every day, says the couple. “We also knew we didn’t want the high maintenance of a log home so we found this to be a perfect fit for us. It allowed us to do a completely customer design, get a cozy rustic feel we like and minimal maintenance.”

Timber frame homes evoke the feel of ancient barns with spanning arches, mortise-and-tenon joinery, and wooden pegs. Strong, and intricate in framework, the homes eliminate the need for the standard boxing of interior walls making the space open and an architectural work of art.

From start to finish, timber frame homes can take anywhere from 10 to 18 months to complete. With the planning process beginning over a year ago, the Aylsworths have planned for a timeframe somewhere between 6-12 months for construction. On average, it takes at least two months just for the timber to be cut and delivered. The framing is already waiting at the Aylsworth site and the couple is anticipating beginning on raising the frame in September and October.

“Being it is a completely custom home that we planned out from scratch, it took a significant amount of time to come up with a layout that we liked as well as one that was structurally possible,” says Jason. Getting the site right was part practicality and part sentimentality, as it was also the location of the couple’s September 2015 wedding.

Even before the project officially got underway though, the site was presenting challenges. On a hillside overlooking the Root River, the site was wooded and the couple spent a good deal of time selectively clearing trees and adding retaining walls to the sloped lot. Large, two by four-foot decorative concrete blocks, weighing about 2,200 pounds each, make up the bulk of the retaining wall. Additionally, another wall was built out of the rock that was dug out in order to get the basement started. Water and electricity also had to be brought to the site.

Once the prep work was done, the couple set to the task of putting the foundation in place. Structural Insulated Panels make up the perimeter of the foundation and basement, enclosing and insulating the home. The panels can be customized to the size of the project specs and are extremely “green” due to their energy and labor savings, not the mention their structural strength, equivalent to a steel “I” beam. The couple opted to use Superior Walls, a company specializing in the prefabricated SIPs. For this project, precast sections fit together to form the foundation wall.

Atop the foundation layer, the timber frame will be built. “Due to the way they are constructed and the use of SIPS panels versus a typically “stick” or stud wall framed house, they are much more energy efficient,” adds Jason. “They are also very customizable and can be made to be virtually maintenance free.”

That appealed to the busy couple who is serving as their own general contractor for the build. “Much of the work we are completing ourselves with the help of family and friends. We also have several local sub-contractors we are working with for things such as the timber frame, well, septic, plumbing, heating, and cabinetry,” says Jason. At this time, the basement walls and basic framing are complete.

While the couple hasn’t done a project of this scale before, the amount of time, energy, and decision making hasn’t deterred them. “There’s lots of decision making,” says Alyssa. “All the big things; roofing, siding, down to every little handle and hinge. Some of the bigger decisions they’ve made include use steel siding, exterior brackets on the gable ends of the home to support the roof overhangs, and a walkout basement design.

The variables to any home project are immense, but add a custom build and non-traditional home and the variables multiply. “As a whole the projects would be considered unusual,” adds Alyssa. “There are additional costs that need to be considered, but luckily we have done very well with finding good deals and shopping sales that we have been able to save significantly in certain areas. It’s all a give and take and deciding which aspects are most important to you.”

“We were originally hoping to be completed before the end of the year, but unfortunately due to circumstances out of our control, we have fallen behind so it may take us into late winter or the early months of next year,” notes Jason.

“When working full time, it is a big time commitment. You give up most or all of your free to time work on it; every night when you get home from work and every weekend, plus having to take additional time off work during certain critical stages.”

Still, the couple wouldn’t change the process and is looking forward to moving in and enjoying their spare time in the area. “We ride and race dirt bikes and enjoy tubing and paddle boarding down the Root River; camping, hunting, hiking, skiing and snowboarding, and of course spend time with our two coon hounds Zula and Charlie,” enthuses Alyssa.

“We’re most looking forward to seeing our hard work pay off and to have a beautiful home for many years to come,” they add.