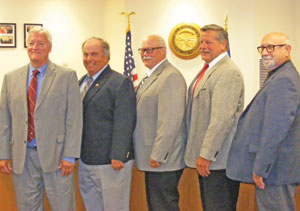 All districts were again represented at the August 27 meeting of the Fillmore County board of commissioners. Newly elected Larry Hindt, representing the third district, was sworn in last week by Judge Matthew Opat.

Corson referred to the VTC as a diversion out of the normal process: conviction and normal probation. VTC intends to promote access to rehabilitation services, reduce use of incarceration, reduce recidivism, and encourage veterans to socialize.

Ribbon cutting ceremonies for the opening of the Third Judicial District Veterans Treatment Court will be held on Friday, September 20 at 1:30 p.m. at the Fillmore County Courthouse. Minnesota Supreme Court Chief Justice Lorie Gildea will be on hand for the ceremony. September 20 is National POW/MIA Recognition Day.

Jessica Erickson, director of nursing, and Brenda Pohlman, health educator, presented a list of projects that will be pursued with Statewide Health Improvement Partnership (SHIP) funding. Erickson said they plan to expend all of the grant funds before the end of the grant cycle. Monies will be used for staffing, education, traffic speed control, the county’s comprehensive plan, hydration stations, Semcac meals, food shelf, and a community needs assessment.

Traffic calming or speed control will involve the purchase of battery powered portable radar signs. They will be available to increase safety for pedestrians, bicyclists, and motorists. The radar signs will be offered to communities within the county. Each sign with a data collection feature costs about $2,700 which will be paid for with SHIP funding. If a community wishes to upgrade to a solar powered sign, the community will need to cost share for the upgrade (about $1,000). They will be asked to work with law enforcement, provide education to the community and monitor data collection from the unit.

County Engineer Ron Gregg suggested appropriate areas for the speed signs including, but not limited to, Kingsland School on CR 1 (rural to residential) and CR 21, Canton to the north. Brenda Pohlman, health educator, spoke to the need for education and the partnership with law enforcement to be effective.

The board approved a resolution accepting the Toward Zero Deaths (TDZ) annual grant. The agreement with Fillmore County public health and sheriff is with the Minnesota Department of Public Safety for two grants (October 2019-September 2020).

Erickson provided an update of the Breastfeeding Peer Counselor program. Houston County has asked to house the employee. Erickson also discussed funding for the Community Health Board and the expected allocation of grant dollars.

•Approval was given for a field drive access to CR 107 for Johnson’s Rolling Acres, Section 17 of Norway Township.

Approval was given for a field drive access to CR 30 for Arlo Warnke, Section 31 of Harmony Township.

•The resignation of Kurt Njos, social worker, was approved with thanks for his two years of service, effective August 23.

A request to replace the social work position through an internal transfer was approved. Nicole Lanz will transfer from Public Health to Social Services effective September 30. Both department heads agreed on the transfer.

A request to advertise for a replacement social worker/RN in public health was approved.

The resignation of Samantha Keasling, deputy sheriff, was approved with thanks for her  9.5 years of service, effective September 2.

•A request to hire Cristal Smith, a current intermittent dispatcher, as a full-time dispatcher was approved, effective September 9.

•There was an extended closed portion of the meeting for a labor contract strategy session with Local #85 Law Enforcement Labor Services. At the end of the regular board meeting the negotiations were reviewed, as was a summary page for a tentative agreement.