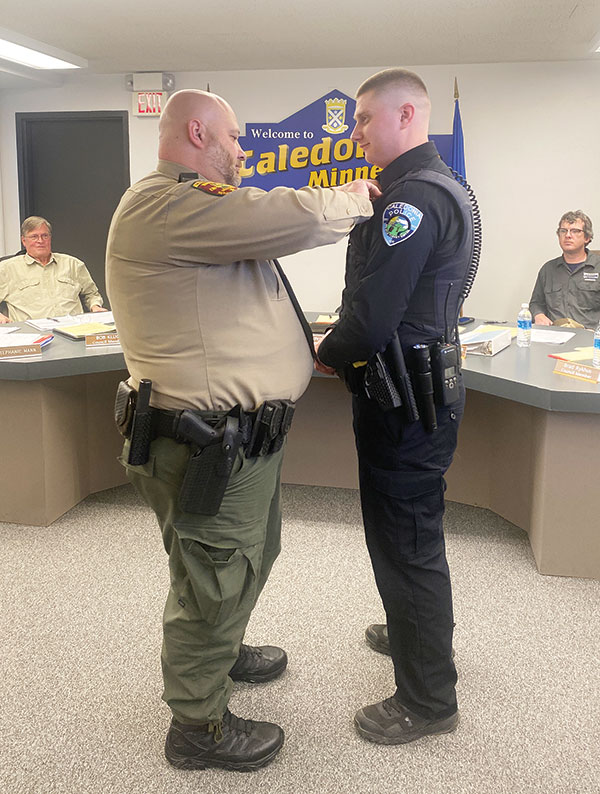 The Caledonia City Council met in regular session Monday, April 11, from 6-8:09 p.m. at city hall. Mayor DeWayne “Tank” Schroeder led the council and audience in the Pledge of Allegiance.

Members approved the minutes from the March 28 regular city council meeting and three other items on the consent agenda – payment of $242,691.98 to Wapasha Construction Co., Inc. for work performed on well house number 8, Wapasha Construction Co. change order for a total of $3,476.32, and hired Jose Martinez as casual, part-time police officer.

Officer Storm Davis was sworn in as an officer of the Caledonia Police Department by Mayor Schroeder. Officer Davis’s dad, Warden Chad Davis, proudly pinned his son before family and friends. Caledonia Police Chief Zehnder mentioned, “It is not often that a father gets to pin his son’s badge on him in law enforcement.”

Matt Mohs, P.E., City Engineer with Bolton & Menk, appeared before the council to present the proposed 2023 S. Marshall St. and E. Grove St. Reconstruction Project. The proposal includes a project overview, estimated costs based on the current market, a proposed timeline and a second timeline including assessments and task order number two. The estimated project cost is $1,551,800, with a projected start of next spring. The bulk of the discussion centered on paying for the project, including bonds, assessments, and ARPA funds. Mann believes “the city can fund the project whether it is assessed or not.” Mohs recommended the city create an assessment policy whether the council decides to assess property owners or not. The group also discussed the difference in the price of going with asphalt or concrete. The board unanimously approved the proposal from Bolton & Menk.

Public Works and Zoning Director Casey Klug presented a quote from Gforce Wraps to print seven two-sided signs for the city’s parks for $1,848. In addition, director Klug noted an added $700 expense for posts and cement. The purchase was unanimously approved.

B&D Sealcoating will crack fill and sealcoat approximately 1,477 feet of asphalt on the city asphalt trail between North Park and W. Foltz Dr.

The next regularly scheduled Caledonia City Council meeting will be held on Monday, April 25 at 6 p.m. at the Caledonia City Hall, 231 E. Main Street, Caledonia. The meeting is open to the public.

The Local Board of Appeal and Equalization (LBAE) meeting is scheduled at the beginning of the next meeting.