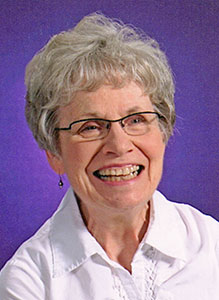 Nancy Jean (Rice) Eerdmans was born on March 13, 1941, to Floyd and Harriet Rice of Fairmont, Minn.  As an eighth grader, Nancy moved with her family to Cambridge, Minn., where she attended junior and senior high school and later resided with her family.  Nancy made lifelong friends wherever she went from those early days in Cambridge all the way to her residence in memory care.

Nancy was known for both her helping personality and her generous soul.  She was deeply involved in her children’s lives and successes, her church’s ministry to the community, and her parents’ care and well-being into old age.  She was an attentive and loving grandma who filled her grandchildren’s lives with encouragement and fun.  Nancy had a keen awareness of others and was selfless in giving people the sort of affection, attention and respect they needed.

Nancy had many talents and avocations.  She was a self-taught and excellent seamstress.  She artfully created many costumes for plays, homemade clothes we were proud to wear, and quilts for family and friends.  She developed a talent for cake decorating, and her cakes adorned many special occasions.  She filled her home with music, with a deep appreciation of show tunes, and she sang all of the standards by heart.  As her memory lapsed, these songs remained available for sing-alongs with Jill and the residents at Harmony Place.

In 1960, Nancy married Ted Eerdmans.  They had three children:  Ned, Jill, and Neil.  After briefly living in Coon Rapids, the Eerdmans returned to Cambridge where all three children attended school.  Nancy was an active member of First Baptist Church and helped with several ministries.  In 2001, Nancy was initially diagnosed with Parkinson’s disease and later with lewy body dementia.  At 69, she could no longer live in her home and moved to Preston, Minn., where she could receive appropriate care and be close to her daughter Jill.

The last five years of Nancy’s life were spent in memory care at Harmony Place in Harmony, Minn.  Her sense of joy and personal well-being were built on the gentle care of her helpers and the unfailing devotion of her daughter, Jill.  Thanks to Jill, Nancy was never alone or far from the love she had shared with her children, family, friends, and neighbors.

Nancy’s Memorial Service will be at First Baptist Church, Cambridge, Minn., on Friday, February 21, 2020, at 2 p.m.  Visitation will be one hour prior to the service.  Interment will be in Cambridge Union Cemetery at a later date.  Online condolences at www.carlsonlillemoen.com.  Arrangements are with the Carlson-Lillemoen Funeral Home and Cremation Services of Cambridge.