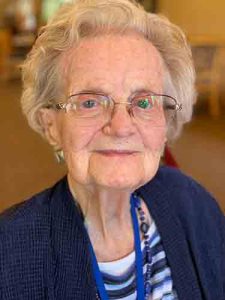 Muriel, born in Harmony, Minn., on August 31, 1926, died Sunday, May 8, 2022.  She was the youngest of 11 children born to Edward and Jane Hoiness. “As long as I can remember I was singing,” said Muriel in an interview in 2019. “I sang in church choirs and we all sang around the Christmas tree.” While attending St. Olaf College in Northfield, she sang in the St. Olaf choir directed by F. Melius Christiansen and toured with the choir. They sang at Carnegie Hall in 1948 and years later she recalled, “I remember someone in the choir fainted, and we all just filled in the space!” After graduation from St. Olaf, Muriel worked as a social worker in Fillmore County, Minn.

Muriel met Wesley A. Waage, a WWII Navy veteran from Noonan, N. Dak., at St. Olaf. They were married in December 1948 in Harmony. Wesley’s father Pastor Knud Olaf Waage officiated. Muriel and Wesley moved to Thief River Falls, Minn., where Wesley taught history at the Thief River high school. Their first child, Steven, was born in 1950. When Wesley was recalled into the Navy in 1950, they moved to San Diego. Mark was born in Harmony in 1951. Donald was born in Thief River Falls in 1954. Miriam was born in Grand Forks, N. Dak., in 1956. Wesley was hired as the Dean and later President at a new junior college to be built in Fergus Falls, Minn. They moved to Fergus Falls and the college and their youngest son David was born in 1960.

The family joined First Lutheran Church, where she sang in the choir, and made many life-long friends. Wesley retired in 1983 and died in October, 1985. Muriel decided to move to Northfield in 1988 to be closer to her family in the Twin Cities and southern Minnesota.  For the next 30 years, she put down roots in Northfield, becoming a member of Bethel Lutheran Church. She made many new and dear friends. During these years Muriel also traveled to Norway, where she visited her father’s childhood home in Skudeneshavn, to the UK, France, Switzerland, and Italy. She also enjoyed many trips to California, New York, and points south.

For the last five years, Muriel lived at McKenna Crossing, a caring community of the Presbyterian Homes network. She attended church at Shepherd of the Lake Lutheran Church, and she sang in the McKenna choir. She was known to break into song at the dinner table. Muriel Jean Waage loved to sing. And we will cherish her memory in our thoughts, our stories, and especially in our singing.

Funeral service will be 11 a.m., Saturday, May 28, 2022, at Bethel Lutheran Church, 1321 North Ave, Northfield.  A reception will follow.  Visitation will be 4-6 p.m., Friday, May 27, 2022, at the Benson & Langehough Funeral Home and will continue at the church on Saturday one hour prior to the funeral.  Interment will be 1 p.m., Tuesday, May 31, 2022, at First Lutheran North Cemetery, Fergus Falls. Pallbearers are her grandchildren.